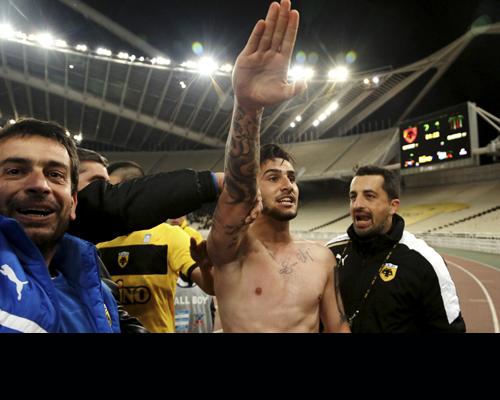 Katidis banned for rest of Greek season for Nazi salute
Reuters / Phuket Gazette
PHUKET: AEK Athens have suspended Giorgos Katidis for the rest of the season after the 20-year-old midfielder made a Nazi salute to fans during a game at the weekend.

The former captain of his country’s under-19 side had already been banned from all international teams for life by the Greek Football Federation (EPO) for making the gesture after scoring the winning goal in a 2-1 Super League victory over Veria on Saturday.

“AEK have decided to leave the player out of the squad until the end of the 2012-13 season … thus imposing the worst possible punishment (we can),” the club said in a statement.

“Whether the player will remain at the club beyond this season will be judged in the summer after which time he will firstly have been given the opportunity to demonstrate in practice his behavior was the result of immaturity and secondly whether or not his possible reinstatement to the squad does not cause any negative effects within the club.”

On Monday, Katidis asked to be dropped from AEK’s first team and called his actions “totally unacceptable”.

“I feel terrible for those I upset with the stupidity of my act,” he said.

“I also understand fully the reasons for the decision made by the Greek Football Federation to which I owe a huge apology as it has helped me to get where I am in the professional game.”

“I cannot turn the clock back but I want to clarify I am not a fascist or neo-Nazi or racist,” he said. “I have a step brother from Puerto Rico and all my family are from the Black Sea and have experienced racism in the worst ways.

“There is no reason to look for excuses. I was completely wrong and I will pay for it with a lot of pain because despite being only 20 my career is now at risk.

“I sincerely apologise to my team mates and everyone involved with the club that I have insulted in not knowing exactly what I had done in my celebration. The fact I did not know what I was doing is no excuse,” the midfielder added.

Katidis was heavily criticised by political parties and on Twitter and Facebook following the incident at the Athens Olympic Stadium.


Mourinho suspects problems with FIFA coach vote
Reuters / Phuket Gazette
PHUKET: Real Madrid’s Jose Mourinho did not attend the FIFA Ballon d Or gala because he was warned by some of those who voted for him as coach of the year that their votes showed up as supporting other candidates instead.

“Am I sorry for not having gone to the gala? No. It was the right decision,” Mourinho told RTP television on Tuesday in excerpts from an interview.

“One, two or three people called me saying they had voted for me but the vote showed up as cast for somebody else. So, I decided not to go,” he said.

FIFA said in a statement: “FIFA confirms that the list of votes published on FIFA.com is accurate.”

Ferdinand’s withdrawal from the squad on medical grounds on Monday has provided the main talking point ahead of Friday’s match in San Marino, with British newspapers labelling the situation a “farce” and a “humiliation” for coach Roy Hodgson.

Premier League chairman Dave Richards joined the debate, saying Ferdinand’s pull-out, a couple of days after saying he would join the squad, brought the game into “disrepute”.

Lampard said he still relished turning out for his country but respected Ferdinand’s decision to opt out because of the need to manage a long-term back complaint.

“I was sorry for him and the team. He’s been in fantastic form so losing players of quality, I’m sorry for him but the important thing is now we’re here we get the results we need,” Lampard told a news conference yesterday.

“There are no personal issues, it’s about results now. When you’re 30 or more you have to maintain yourself differently,” Lampard said at the team’s headquarters in Burton.

“Rio has picked up a couple of injuries earlier in his career and he’s kept on top of himself.”

With Lampard’s Chelsea team mate John Terry no longer available for England and several pull-outs on top of Ferdinand’s U-turn, England are lacking experienced personnel in the centre of their defence.

England, who are second in Group H and face leaders Montenegro in a week’s time, could do with Ferdinand’s experience for the tough trip.

Lampard believes Ferdinand, who has 81 caps, could still appear for England again but insists the absence of several players through injury would allow others to step up.