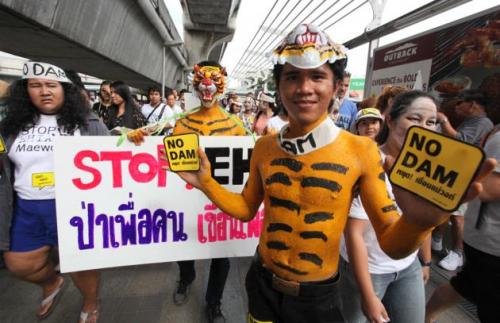 Momentum has been building since the symbolic march from the project site by a group of conservationists led by Sasin Chalermlarp, secretary-general of Seub Nakhasathien Foundation, kicked off 13 days ago. Support among anti-government groups built steadily throughout the course of the march.

Along with comments on social media supportive of the 368-kilometre march, a large number of people representing several anti-government groups welcomed the team’s arrival in Bangkok yesterday. They held small gatherings to usher Sasin’s entourage along the capital’s streets to the Bangkok Art and Culture Centre, where the march team stopped and rested.

In a brief interview upon his arrival yesterday, Sasin said he was not worried over the vow by the government, and by Deputy Prime Minister Plodprasop Suraswadi in particular, to go ahead with the dam project. “I believe in the power of those who agree with me, which makes me feel confident that we can stop the dam project from progressing,” he added.

Sasin later issued a statement, read out at the site, dismissing the credibility of the government-commissioned environmental health impact assessment (EHIA) and other details regarding the dam project. The statement also said the Mae Wong project could not effectively solve flooding in the region around Nakhon Sawan, and that the dam was capable of holding less than 1 per cent of the water volume that flowed through the Central region in the massive flooding two years ago.

The march has been hailed by middle-class people, conservationists and environmentalists as a crusade against an array of government projects they deem devastating to the natural environment. It comes despite demonstrations of support for the project by locals living near and around the projected dam site, who believe they would profit from it, as suggested in government documents and based on their own long experience of seasonal droughts and floods. They believe these problems would be solved if the Bt13-billion dam is built.

Sasin, supported by 28 NGOs who signed the statement, submitted a list of eight demands to a representative of the Natural Resources and Environment Ministry, and vowed to further campaign against the dam project, which has been backed by all previous governments over the past three decades.

A panel of National Environmental Board experts will today consider postponing deliberations on the Mae Wong Dam project, said Udom Kraiwatnusorn, a ministry representative. The possible postponement is seen as resulting from the march and the show of support for it by the project’s opponents.

Irrigation authorities say the Mae Wong Dam is needed to cope with drought and flooding problems each year, especially in the region connecting the lower North and the upper South. There are only two areas fit for building large-sized dams – Nakhon Sawan’s proposed Mae Wong Dam project site, and an area spanning the Upper and Lower Yom River (Mae Yom) mostly located in Phrae province.

Sasin’s statement said the EHIA also failed to designate an area for forestation to make up for around 13,000 rai of fertile forests in Mae Wong National Park that would be lost to the dam project. The statement also alleged unfair changes to personnel on a number of advisory committees, with those showing opposition to the project being replaced, adding that some panels had no representation of experts from NGOs or departments relevant to animal and wildlife conservation.

The march arrived at Bangkok’s Kasetsart University at 8.30am yesterday, welcomed by a large group of people who had followed it along the route to the Bangkok arts centre.

Sasin said the march covered around 368km – 20 km short of an early estimate of 388km. He repeated that Mae Wong’s jungles were the heart of the area’s overall ecological system.

He said Tambon Non Mak Moon and Tambon Klong Takian health-promotion hospitals had been forced to temporarily stop offering services because they were under water.

“Floodwater levels there are between 50 and 70 centimetres.”

“[If the flood threat is imminent] medical supplies and medicines must be moved to safe areas. Power reserves must be available to ensure that floods won’t disrupt the electrical system and treatment for patients,” he said.

“We have deployed flat-bottomed boats to help victims move their properties to higher ground. We have also fixed bridges that were damaged by raging floodwaters,” Defence Ministry spokesman Thanatip Sawangsang said.

He said PM Yingluck Shinawatra had instructed the Armed Forces Headquarters to support relevant agencies in flood-relief operations to minimise damage or casualties.

Deputy Prime Minister Plodprasop Suraswadi, in his capacity as chair of the Water and Flood Management Commission, was most concerned about Ayutthaya. He said people living along the Chao Phraya could be affected the most, as farmers were releasing water from paddy fields to prepare for harvesting.

As for the situation in Bangkok, Thanatip said the Navy had deployed 16 boats to use their propellers to push floodwater to less flood-prone areas of the capital such as Bang Khen and Thawi Watthana canals.

“We want to assure Bangkok residents that they won’t face a repeat of the 2011 flood crisis,” he said.


Villagers near gold mine seek police help
The Nation / Phuket Gazette
PHUKET: Residents of six villages in Baan Khao Lueng of Loei’s Wang Saphung district called on the government yesterday to maintain peace and order after a group of some 20 armed and camouflaged men destroyed a barrier set up to protect the communities from the operations of the Tungkum gold-mining company.

“We demand that police bring the perpetrators to justice,” the residents said in a statement.

The villagers, calling themselves the Love Homeland Group, said in the statement that the firm, which has been in the area since 2006, had its mining operation suspended due to its adverse impact on the environment and the potentially fatal health hazard it posed to villagers.

Since the firm entered the area, villagers have also been