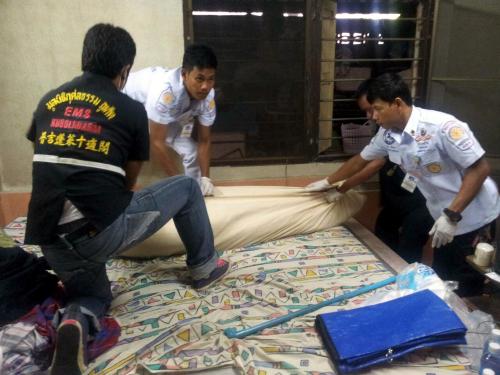 PHUKET: A man who had been afflicted for 30 years by an autoimmune disease that left him unable to walk without a walker was found hanged in his room this morning.

Police responded to a call from a local coffee shop in Baan Sapam behind which Anan Areerat, 60, lived with his family, and found him hanging from metal security bars fitted to the window of his bedroom.

“There were no signs of struggle,” said Capt Somchai Nhuboon of Phuket City Police.

“My father had been suffering from myasthenia gravis since 1983,” said Wichanon Arerat. “He could walk, but he needed a walker.”

Mr Wichanon told police that his father had talked about killing himself several times recently.

“We convinced him not to do it and told him that we wanted him to stay with us. Everyone in our family kept a closer eye on him after that,” said Mr Wichanon.

Mr Anan’s sister said that last night he showed no signs that he would kill himself.

“My mother found him when she took him breakfast, as she did every day,” she said.

“His wife left him years ago,” she noted.