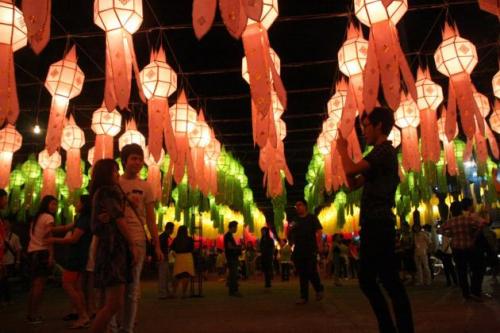 Chiang Mai, Hua Hin best
The Nation / Phuket Gazette
PHUKET: The Live and Invest Overseas website has ranked Chiang Mai and Prachuap Khiri Khan’s Hua Hin district as a couple of the world’s best places to retire due to the low cost of living and beautiful beaches.

Chiang Mai and Hua Hin were included in a list of 21 other cities, including Abruzzo in Italy, Ambergris Caye and Cayo in Belize, Boquete in Panama and Cebu in the Philippines, because of the low cost of living with 37,500 baht per month.

Moreover, the cost of insurance and medical service are not too expensive for foreigner.

While Hua Hin was picked up because of the precious beaches and low cost of living.


Aussies plunder trophies in Phuket
The Nation / Phuket Gazette
PHUKET: Winds gusting to 20 knots made for a perfect end to what turned into one of the best Cape Panwa Hotel Phuket Raceweek’s yet.

The weather conditions delivered fast and exciting racing throughout the four days.

Two races for all except the Classic class made for a hectic schedule on the final day and, with some classes undecided, there was plenty still to play for.

Wan Ma Rang in IRC Racing I closed out the regatta with two second places. However, it wasn’t enough to overhaul Katsu, who sailed consistently and held onto their second place by three points.

Class honours went to Australian Peter Ahern and his all-star crew on Oi! who with seven wins from eight races were untouchable. Formerly Team Premier, Oi! were bought by Peter Ahern, Scott Bailey and Fergus Wilmer recently and Phuket Raceweek was their first competitive event. Having got some early points on the board in the 2013/14 Asian Yachting Grand Prix Championship, Oi! now heads to Hong Kong to compete on the circuit.

IRC Racing II has been dominated by fellow Australian Peter Sorensen and his crew on Fujin, and that continued through to the final race. Eight wins from eight races speaks for itself, and as sailing star Steve McConaghy, who was racing onboard the former Ichi Ban, said, “you could sail this thing backwards and still win.”

The battle, however, was for second and third places in the class, with Stuart Williamson’s Skandia Endeavour of Whitby and Neils Degenkolw’s Phoenix neck and neck. Despite struggling with their starts and being called OCS on more than one occasion, a good performance on the final day for Williamson and his crew (a 2,3 scoreline), saw them secure second overall and relegate Phoenix to third.

In IRC Cruising, Irish entry Windstar, helmed by Peter Woods, revelled in the conditions to finish the last day with two more wins, and win the class by four points.

The doggedly-determined Aussie team, Rob Azzopardi’s Dreamtime, with two second places on the final day, could not overhaul the leaders and had to stay in second place overall, four points back. Mike Crisp, helming Sail in Asia Venture, finished third overall on 11 points.

Reading the conditions best and sailing consistently has been Twin Sharks, skippered by Briton John Newnham, who didn’t compete in the last race yesterday having already won seven from seven to become the clear class winner in the super-fast Firefly 850 sport catamarans.

However, second and third was a much closer battle, between Hans Rahmann’s Voodoo and Roger Kingdon’s Moto Inzi. Voodoo came into the final day with a slight edge, and a 2,1 scoreline on the day saw them complete a strong Series and place second ahead of Moto Inzi by a single point.

The Multihull Racing class saw a remarkable comeback by Phuket skipper Mark Pescott, with a second and a first in the last races that secured victory for DaVinci (12 points), who defended their title by just one point from the week’s leader, Alan Carwadine’s Asia Catamarans Hurricane. Third was another early leader, John Coffin’s Java, on 16 points.

While the Aussies took home a lot of silverware from this year’s regatta, what was noticeable was the large number of high-scoring boats and winners from Ao Chalong Yacht Club.