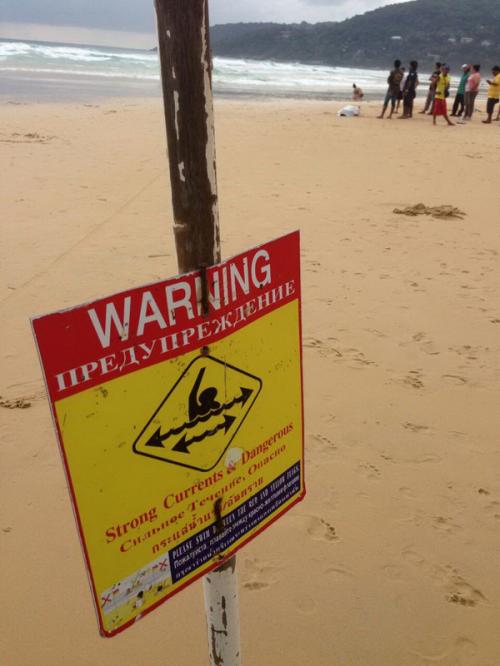 PHUKET: A man believed to be a Russian tourist ignored lifeguards’ warnings and entered the surf at Karon Beach yesterday afternoon – and drowned within five minutes, the Phuket Gazette has been told.

Uten Singsom, head of the Kata-Karon Lifeguard Club, said that his lifeguards took 20 minutes to recover the man from the strong surf.

“He came to the beach alone at about 4pm and ignored the red flags posted on the beach near Karon Circle [map here],” said Mr Uten.

“Lifeguards warned him not to swim there as it was exactly where we posted the red warning flags,” he added.

The man was spotted in difficulty less than five minutes later, as a rip current pulled him away from shore while he was pummeled by strong waves, Mr Uten explained.

“We spent about 20 minutes trying to reach him, but it was already too late by the time we got him back to shore,” Mr Uten said.

The man’s body was sent to Vachira Phuket Hospital in Phuket Town.

“We could not identify him. However, we believe he was a tourist, likely Russian, about 30 to 40 years old,” Mr Uten said.

Capt Channarong Prakongkua of the Karon Police told the Gazette that his officers had yet to confirm the man’s identity.

“Police have informed hotels in the Karon area to report to us if any of their guests are missing,” he said.