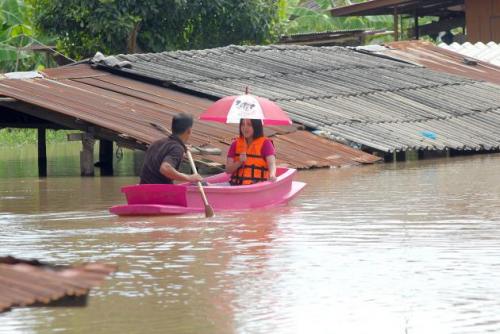 Bank executives at the meeting agreed to implement a number of the security measures put forward, including higher counters – making it more difficult for criminals to reach bank employees.

They also agreed to increase the number of security cameras overlooking parking lots and angled to capture the faces of customers.

Bank entrances will also have two doors in order to slow down escaping robbers, Thana said.

Another deputy spokesman, Anucha Romyanant, reported that 30 bank and 156 convenience-store robberies had occurred this year. Arrests and arrest warrants had also risen by 70 per cent, he added.

In addition, 20 gold-shop robberies had been carried out this year compared with 49 cases last year. Police had so far made arrests in 16 cases connected with the robberies, he said.

Anucha praised gold-shop owners for their cooperation in increasing the number of grille and alarm installations.

He urged people to report suspicious behaviour to the 191 or 1599 police 24-hour hotlines.

24 provinces under grip of floods
The Nation / Phuket Gazette

PHUKET: The Royal Irrigation Department is keeping a close eye on the impact of the upcoming tropical depression from Vietnam, which might affect several provinces in Thailand’s Northeast and Eastern regions

He expressed concerns about the flood situation in Prachin Buri as the Pasak Chonlasit Dam is now nearly full and needed to discharge some volume of water before the new tropical depression arrived.

“We have to discharge about 8.9 million cubic metres per day from the dam to prepare for the upcoming depression,” he said.

Suthep explained that the department would drain the excess amount of water into the fields on the western and eastern banks of Chao Phraya River.

However, he explained that most of the flood-affected areas were located along the river and waterway and that is why they were at risk from the adverse impact of the flooding.

Floods have already affected more than 2.1 million people this month and ravaged more than 1.14 million rai of farmland.

Disaster Prevention and Mitigation Department director-general Chatchai Phromlert said yesterday that floodwater had also damaged 2,310 roads, 6,900 houses and 145 bridges. “Of the 29 flood-hit provinces, the situation in just five has returned to normal as of today,” he said.

Many of these provinces are heavily flooded. The worst-hit spots in Chaiyaphum are about 2.8 metres under water.

In Buri Ram, floodwater levels have soared above three metres in Krasang district, marooning more than 200 families. Officials are making desperate efforts to get relief items to these victims.

Working alongside local administrative bodies, the department has mobilised thousands of volunteers to deliver assistance. More than 1,500 boats have been dispatched to reach the victims. Not all, however, are happy with the authorities’ response.

Anong Thongsri, a 46-year-old resident in Prachin Buri’s flooded Kabin Buri district, lamented that assistance efforts had failed to reach all those affected. “The floodwater level is also rising,” she said.

The Government Housing Bank has offered a debt moratorium for flood-hit customers, whose loan repayments will be suspended for up to nine months depending on the severity of their situation. During that period, no interest will be charged on the loans.

Should flooding damage the whole house of a loan recipient, the bank will write off all outstanding debt on the house, leaving just the debt from the land purchase to pay.

PHUKET: The Court of Appeals has meted out a three-year jail term to an elderly woman for causing the death of an intruder who was killed by an electric fence she had put up to protect her home-grown kratom (Mitragyna speciosa), which is on the narcotics list, in 2011.

Thongdee Jamsri, 73, accepted the ruling but said she planned to ask for a royal pardon.

Her daughter cried upon hearing the verdict, saying the convict has many chronic diseases.

The case against Thongdee started in 2011. Last year, the lower court sentenced her to three years and four months in jail. She appealed.

The Court of Appeals, however, yesterday upheld the guilty verdict and jail term, though with a reduced imprisonment period. The woman was denied a suspended jail term because she had earlier been prosecuted for possessing kratom.