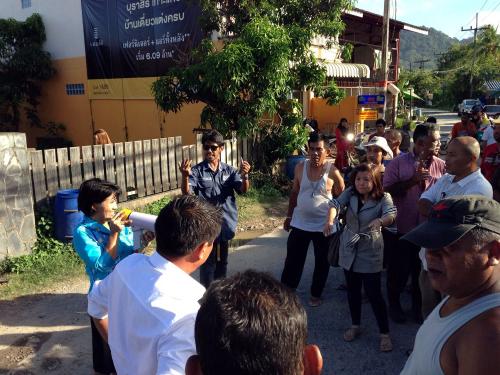 PHUKET: Villagers on Soi Han Farang finally lost their patience with the constant stream of over-sized trucks rumbling past their homes and held a protest yesterday afternoon to demand an end to what they view as a serious nuisance and health hazard.

The road is used many times a day by trucks bringing soil and construction materials to about half-a-dozen property-development companies in many areas such as Koh Keaw, Srisoonthorn and Pah Kok.

The nuisance is heightened by the fact that the road is in a bad state, causing soil to fall from many of the trucks.

“There’s a one-kilometer stretch along the road that is in a poor state of repair. The trucks are even noisier there,” Koh Kaew Subdistrict Administrative Organization (OrBorTor) President Khuakiet Chitkhua said after his visit to the area.

“Locals are concerned about their health because of all the dust raised by the trucks,” he said.

“Despite those strictures, the villagers got tired of the trucks and all the dust. That was why they protested again yesterday,” Mr Khuakiet said.

In response to the most recent protest, Mr Khuakiet has banned all over-sized trucks from the road and has set aside a 4-million-baht budget to fix the roadway.