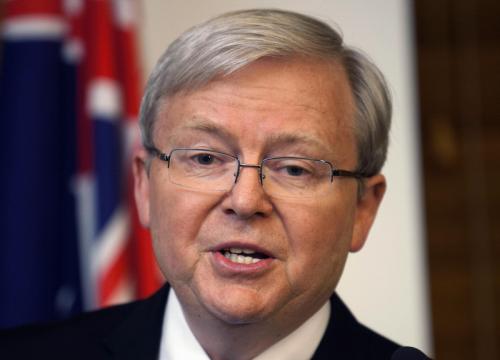 
Rudd sworn in as Australian PM
Reuters / Phuket Gazette
PHUKET: Kevin Rudd was sworn in as Australian prime minister for the second time on Thursday, a day after toppling Julia Gillard and three months out from scheduled elections with polls suggesting the ruling Labor Party is staring at a devastating defeat.

Rudd’s resurrection as prime minister comes after three years of bitter infighting within the Labor leadership and as the world’s 12th largest economy faces challenges from a slowdown in top trade partner China.

Late on Wednesday Rudd, a Mandarin-speaking former diplomat, highlighted the difficulties associated with “the end of China’s resource boom” and said he would work to rebuild the government’s strained relations with the business community.

He made no mention of whether he would change policy or bring forward elections due on September 14.

Australian business was scathing of the political instability and called on Rudd to abandon laws which strengthen trade union access to the workplace and which tighten rules for temporary skilled immigration.

“Our tolerance factor with instability in the leadership of Australia’s government is at breaking point, matched only by a swathe of anti-business policies which have brought business frustration to boiling point,” said Australian Chamber of Commerce and Industry chief executive Peter Anderson.

Immigration Minister Chris Bowen was sworn in as Treasurer and Transport Minister Anthony Albanese was sworn in as deputy leader on Thursday, after Rudd won an internal party ballot to oust Australia’s first female prime minister.

Financial markets see few implications for the $1.5 trillion economy, which is struggling to cope with the end of a historic mining boom as commodity prices fall and a record pipeline in resource investment starts to falter.

Manufacturing has been hurt by a strong Australian dollar and other sectors of the economy are struggling to pick up the slack as the mining bonanza fades.

“While some bounce in the polls and possibly confidence is expected, the political games will be largely a sideshow to deeper issues in the Australian economy,” Nomura interest rate strategist Martin Whetton said of Rudd’s re-appointment.

Rudd’s return is the latest chapter in a three-year battle with Gillard, his former deputy who rolled him in 2010 and led a minority government. Gillard announced she was quitting politics at the next election after losing the party ballot.

Rudd is likely to test his support in Australia’s hung parliament, but he has commitments of support from the Greens and three independents, making it likely he will be able to control a majority.

The shift back to Rudd came after a series of polls found Labor is facing electoral annihilation in September, losing up to 35 seats and handing a massive majority to the conservative opposition.

Rudd, always among the most popular of politicians with the electorate, was welcomed back by voters.

“I am glad that we’ve now been given the opportunity to have the prime minister we voted in several years ago,” said Peter Mayson, a building industry employee in Sydney.

Analysts said the dramatic leadership change should help lift Labor’s standing in opinion polls, although the initial boost might not last until the elections and Labor was still likely to lose power.

“I think Kevin Rudd will probably do better than Gillard would have done,” Nielsen pollster John Stirton told Australian radio on Thursday. “Where it could come unstuck is that the initial burst of support simply may not last.”

Opposition Leader Tony Abbott has called on Rudd to call an election for early August to end the instability and to let voters decide who should be prime minister.


Snowden still at airport, Ecuador asylum decision could take months
Reuters / Phuket Gazette
PHUKET: Edward Snowden, a former U.S. spy agency contractor facing charges of espionage, remained in hiding at a Moscow airport on Wednesday while the prospect grew of a protracted wrangle over his fate.

Ecuador, where Edward Snowden has requested asylum, said a decision could take months and asked Washington to argue its case for extradition. Russia said Snowden, whose flight is proving a growing embarrassment for President Barack Obama, was still in the transit area of Sheremetyevo airport.

A leading U.S. senator sought to raise pressure on Ecuador by saying he would seek to end preferential access for its goods to the United States if it gave asylum to Snowden, while Quito denied it had given him any travel document.

Snowden fled the United States to Hong Kong this month after leaking details of secret U.S. government surveillance programmes, then flew on to Moscow on Sunday.

He has not been seen in the transit area – the zone between the departure gate and formal entry into the country – since his arrival, although a receptionist at a hotel in the transit zone said he looked at the prices there on Sunday, then left.

Russian President Vladimir Putin has denied that Snowden was being interviewed by Russian intelligence and called any U.S. accusations that Moscow was aiding him “ravings and rubbish”.

There was no sign of Snowden registering for onward flights out of Russia on Wednesday.

“They are not flying today and not over the next three days,” an Aeroflot representative at Sheremetyevo said when asked if Snowden and his legal adviser, Briton Sarah Harrison, were due to fly out. “They are not in the system.”

U.S. Defence Secretary Chuck Hagel said on Wednesday that Snowden’s leaks to news media had been a “serious security breach” that damaged U.S. national security. He repeated calls for Moscow to hand him over.

“I would hope that the Russians do the right thing here,” Hagel told a Pentagon news conference, adding that Moscow evidently had not made a final decision since Snowden reportedly was still at the airport.

Putin has said he will not extradite Snowden. By declaring that he is in the transit area, Russian authorities maintain the position that he has not formally entered Russia – a step that would take the dispute to another level.

Russian law requires travellers who spend more than 24 hours in the airport’s transit area – as Snowden has done – to obtain a transit visa, which in some cases is valid for three days.

It is unclear whether Snowden has sought or received a visa, and if so when it would expire. The United States said on Sunday it had revoked Snowden’s passport.

Several people, mainly refugees, have been able to stay in Moscow’s airports for months.

What is clear is that the longer the situation remains unresolved, the more it could fray U.S.-Russian ties.