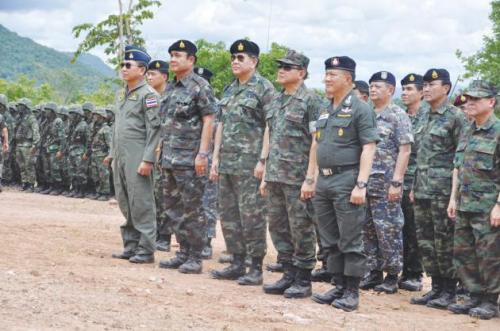 Army will have nothing to do with Thaksin return: Thanasak
The Nation / Phuket Gazette

PHUKET: Supreme Commander General Thanasak Pratimapakorn said yesterday that the issue of whether former PM Thaksin Shinawatra will be allowed to return as a free man was not up to the military because it is not the Justice Ministry.

Thanasak said this in reaction to questions about the recently leaked audio clip purportedly of a conversation between Thaksin and Deputy Defense Minister Yuthasak Sasiprapha, in which they discussed several topics including the former leader’s return to the Kingdom.

When asked about being referred to in the clip by his position, and one of the parties saying he was in good terms with Prime Minister Yingluck Shinawatra after a rocky beginning, Thanasak said he was not offended.

“My principle is that I talk with other top brass with reason,” he told reporters.

Asked if the leaked audio clip would have a negative effect in his relationship with others in the armed forces, Thanasak reiterated he was not angry with anybody.

When asked how the public could be assured that the military is not being manipulated politicians, the Supreme Commander responded by asking reporters if the armed forces had ever been under any political manipulation.

PHUKET: Barisan Revolusi Nasional (BRN), which is believed to have authority to command some insurgents in Thailand, has announced a break in violence in the South for a 40-day period associated with Ramadan, a much-awaited statement, read out yesterday in Kuala Lumpur by a senior Malaysian official, said.

The period, which includes additional Muslim holidays, runs to August 18, although Ramadan this year runs until August 7. The areas to be free from violence are Pattani, Yala, Narathiwat and five districts in Songkhla, said Samsamin Bin Hazim, chief facilitator for the Malaysian government, which hosted three official meetings between Thai officials and BRN members. The five districts in Songkhla are Na Thawi, Sadao, Saba Yoi, Thepha and Chana.

The statement says the next round of the meetings will be after Ramadan ends.

It stipulated that both parties believed that the ongoing dialogue was the best solution to bring peace and prosperity to Thailand’s far South. Any party that violates these conditions shall be condemned by all Thais across the country. Members of both parties will maintain best efforts to honor the peace conditions and mutual understanding about them to achieve the objectives during the holy period, it said.

Thai authorities are, as agreed, responsible for security operations in those areas and BRN is committed to establishing safety during the period, along with prosperity of local residents regardless of their race, culture or religion, the statement said.

The Thai authorities are obliged to scale down raids and security blockades.

To reciprocate, BRN will not resort to violent acts, including armed attacks, bombs, or ambushes on officials or civilians. BRN “will try its best” not to cause property damage or conduct attacks.

National Security Council secretary-general Paradorn Pattanatabutr said officials would not be “careless” during the period, but he was more optimistic as a whole. He said BRN would come under pressure if violence occurred despite their vows.

He said BRN acknowledged that a bomb by a railroad in Raman in Yala on Thursday was the work of insurgents opposed to the peace talks.

Monk says temples in Europe will take him: supporter
The Nation / Phuket Gazette

PHUKET: Luang Pu Nenkham dismissed a threat by Thai monastic authorities to expel him and claimed Buddhist temples in France and Germany were ready to take him in. He said he would return to Thailand on July 31 with “bigger greatness”, key follower Sukhum Wongprasit said yesterday.

The Office of National Buddhism chief Nopparat Benjawatananun warned, however, that such a move was impractical and would still end up with the monk lacking authority or being unsupervised, because temples overseas weren’t under Thai law or the Buddhist Order Act.

A transfer of supervision needed permission from the previous supervisor as well as an official letter from the new supervising temple, he said.

Sukhum yesterday submitted a request for justice to the Supreme Patriarch’s Secretary’s Office at Wat Bovornniwet but it was turned down on grounds that he didn’t make an appointment and he wasn’t a “damaged party”. He also lacked a proper letter to show he had permission to act on the monk’s behalf.

So Sukhum gave the letter to Wat Bovornniwet abbot assistant Phra Thepsarnvethi, who said he would present it to Acting Dhammayut order head, Somdej Phra Wannarat, although there is a procedure in the Sangha chain of command to handle such issues.

Sukhum requested that the Ubon Ratchathani monastic committee extend its deadline for Luang Pu Nenkham to report himself be postponed to July 31. Sukhum also urged Ubon Ratchathani monastic chief and the Department of Special Investigation (DSI) to consider a recent confession by the monk’s younger brother, identified only as Suri, who they say is the man in the photograph picture, which people previously speculated was the monk and a female.

He said Suri, who ordained at the same temple, had left the monkshood a few years ago. He also urged that the DNA test result – key evidence in moves to disrobe the monk before facing criminal charges – should meet international standard.

Sukhum, who said he was in “constant contact via Line and Facebook” with the monk, said the monk would return on July 31 “with bigger greatness” and the threat by a temple at Ubon Ratchathani to expel him was not a worry, because Buddhist temples in France and Germany were ready to take him in. He said he would reveal details of his contact with the monk on Monday. Sukhum is linked to the World Peace University, which is also under investigation.

The DSI yesterday submitted a report of alleged criminal violations by the monk to senior monks at a temple in Ubon Ratchathani who are considering whether to expel him. They include a DNA test on the monk’s alleged son (results of which are due today).

Phra Rajathamkosol, abbot of Wat Tai Phrachao Yai Ong Teu, said the DSI should handle criminal allegations while his side handles the monk’s violations of Sangha rules. He expected the monk would be expelled by midnight last night.