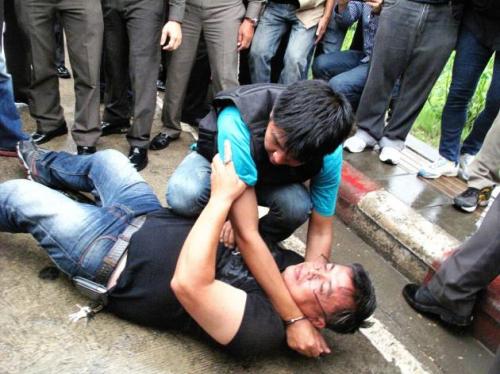 PHUKET: The Senate panel on human rights yesterday called on the Royal Thai Police to change the chief investigator in the case involving the murder of businessman and government critic Akeyuth Anchanbutr.

Somchai Sawaengkarn, chairman of the Senate committee on human rights, liberty and consumer protection, said the chief investigator, Metropolitan Police Commissioner Pol Lt-General Kamronwit Thupkrajang, had personal conflicts with Akeyuth and should be taken off the case.

The senator noted that Kamronwit and Akeyuth had sued each other in the past, and hence the former should not oversee the probe.

Somchai also called on police to allow non-partisan agencies, including the Law Society of Thailand and the National Human Rights Commission, to join in the investigation.

He said it was premature for police to conclude that Akeyuth was killed for the Bt5 million he was carrying, because his attackers did not take any other valuables from his house. Somchai said valuables on Akeyuth’s property amounted to more than Bt5 million and could have been taken away far more easily.

Somchai said police had not yet released details about the house in the Lat Krabang area where the perpetrators had allegedly held Akeyuth before his murder. He said that he believed the murder was more complicated than the robbery theory put forward by the police.

He said the Senate panel had discussed the murder and agreed in principle to summon persons involved to testify.

During discussions, the Senate panel agreed that the government should provide people with better measures of protection. The senators said that though Akeyuth was disliked by many, there was no reason to murder him.

Kamronwit yesterday rejected criticism that police were not pursuing the real motive behind the murder.

After a meeting with National Police chief General Adul Saengsing-kaew on the development of the case, Kamronwit held a press conference at which he insisted that the motive behind Akeyuth’s killing was the Bt5 million and that it was not politically motivated, as believed by Akeyuth’s family and lawyer.

“I do not care about allegations that police are trying to wrap up the case quickly by making it a ‘theft’ case. Police are carrying out their duties to the best of their abilities,’ Kamronwit said.

Akeyuth’s family and his lawyer had earlier said they believed the murder was politically motivated, since the businessman had long been a critic of the government and a whistleblower against the Thaksin Shinawatra regime. His latest message on his Facebook page in May referred to the money-laundering activities of Thai politicians and bureaucrats in the UK.

Kamronwit said police believed four people were involved in the murder: three had been arrested and Suthipong “Berm” Pimpisal, who is a key suspect, was still at large. Police yesterday continued their hunt for him as other suspects gave statements that he was the man who strangled Akeyuth to death with rope.

Kamronwit denied reports that police had already arrested Suthipong, saying he was probably still somewhere in Bangkok. He added that since Suthipong was a key suspect, there were fears that he could be silenced before being apprehended.

Meanwhile, the Criminal Court has allowed Ithipol Pengduang, 51, and Jitampai Pengduang, 48 – parents of Santiparb – to be released on bail of Bt100,000 each. The two have been charged with receiving stolen money between June 13-24. Santiparb reportedly gave the Bt5 million to his parents to hide. Police initially refused to grant their release on bail on grounds that most of the stolen money had not yet been found. It was feared they might destroy the evidence or flee with the stolen cash.

Kamronwit said police had so far only recovered Bt420,000 of the stolen Bt5 million.

PHUKET: The Anti-Money Laundering Office (AMLO) has found seven major vehicle importers fudging their financial figures to evade taxes, including one suspected of involvement in the recent accidental burning of exotic cars being trucked in Nakhon Ratchasima.

The seven firms actually had sales worth over Bt11 billion in 2011 but stated only Bt4 billion, denying the country tax income from these imports, AMLO chief Sihanart Prayoonrat said yesterday in reporting on his agency’s progress in checking the transactions of 222 luxury auto importers.

AMLO would proceed with probing 200 other companies and submit the results to the Revenue Department to audit them and collect back-taxes from them.

If the Customs Department confirms that these companies also falsely declared items or their values they would be also guilty of violating the anti-money laundering law and their assets could be seized. The case of the burned cars is being handled separately by the Department of Special Investigation.

PHUKET: Thailand plans to borrow a white elephant from Myanmar as a symbol to mark 65 years of bilateral ties between the countries, Deputy Prime Minister and Foreign Affairs Minister Surapong Towichukchaikul said yesterday.

Diplomatic relations between the two countries will reach their 65th anniversary next year, and Surapong said an “auspicious” white elephant might play the symbolic role of a good-will ambassador, following in the footsteps of China’s “panda ambassador” Lin Ping. The elephant could be displayed in Chiang Mai Zoo for six months to boost tourism, he said.

The Myanmar ambassador told Surapong that he would discuss the matter with the Nay Pyi Taw government.

Surapong also reported his discussion with U Wunna Maung Lwin on the European Union’s wish for Thailand to aid some 2,000 Rohingya Muslims who have fled Myanmar for Thailand this year.

The Myanmar minister assured him that a working team, led by Myanmar’s ambassador to Thailand, was set to begin the process of verifying the Rohingya’s nationality next week. Four months of the six-month period designated for Thailand to aid the Rohingya had already passed, so the identification process would aim for completion in two months, he said.

Surapong added that he had told EU representatives that Thailand had given what humanitarian aid it could to the Rohingya, but it was not a rich country. The EU should also help take in these immigrants, and not just leave them as Thailand’s sole responsibility, he said.