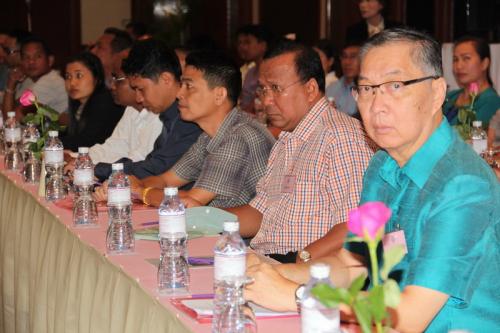 PHUKET: The Senate Standing Committee on Tourism yesterday highlighted a series of issues plaguing Phuket due to the rapid development of the province into a major center for mass tourism in Thailand.

“The growth of the tourism industry in Phuket is the source of many problems at its natural tourist attractions. Land and beach encroachment, as well as air and water pollution, are all serious concerns that affect the tourism image of the island,” Senate Standing Committee on Tourism 2nd Vice-Chairman Pichit Kuandachakupt said.

Gen Pichit went on to point out that vendors harassing and taking advantage of tourists, as well as excessive numbers of beach chairs and umbrellas were also having a negative impact on tourists’ experiences.

Nonetheless, Gen Pichit spoke highly of the province as a whole.

“Phuket has many beautiful natural tourist attractions. It is like a dream destination for both domestic and foreign tourists. Every year it generates a great deal of revenue for Thailand,” said Gen Pichit.

The need to maintain and improve the experience offered to tourists in the province was why the Senate Standing Committee on Tourism dubbed their seminar “Organize Phuket tourist attractions for a sustainable tourism industry”.

The seminar was designed to gather invested parties, government agencies and members of the private sector to barnstorm solutions to the plethora of issues highlighted by the committee, explained Phuket Senator Tunyaratt Achariyachai.

“We need to find a way to maintain a clean and beautiful marine environment to support the activities and main attractions for tourists visiting Phuket,” Gen Pichit said.

In an effort to reduce pressure on the marine environment and the island as a whole, Tourism and Sports Minister Somsak Pureesrisak said that the government needed to shift its tourism goals.

“The current government policies have been focusing on enhancing tourism by making tourist attractions more popular. However, that needs to change. Thailand needs to promote some areas, such as Phuket, for high-end tourism instead,” he said.

The Tourism Minister went on to point out that the dramatic increase in the number of tourists over the years, reaching nearly 10 million last year, was putting pressure on the island, which does not have adequate facilities and tourist services to provide for the rapidly growing number of visitors.

Nonetheless, the Mr Somsak was sure that solutions could be implemented to create a sustainable tourism industry on Phuket.