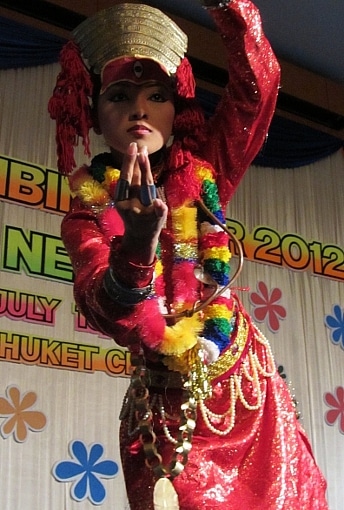 PHUKET: Members of the media, local officials and other invited guests enjoyed a fine cultural show and dinner on Tuesday, courtesy of the Nepal Embassy from Bangkok, which is promoting that country’s many tourism opportunities as part of its ‘Visit Lumbini Year’ campaign for 2012.

The event, which took place in the grand ballroom of the Royal Phuket City Hotel, featured a brief slide presentation showcasing one of the most dramatic landscapes on earth: the Himalayas.

Nepal is home to eight of the world’s 14 highest peaks and has developed a wide range of activities for people to enjoy them, from trekking and mountaineering for the more energetic, to luxurious personalized flights over Mt Everest and other peaks for the well-heeled.

Of particular interest to Buddhists is the historical site Lumbini, birthplace of Crown Prince Siddhartha who later attained enlightenment to became the Lord Buddha.

“One of the reasons to celebrate ‘Visit Lumbini Year’ is to unite the world to work toward creating a peaceful society through the messages of Lord Buddha,” he said, adding that the country hoped to increase its annual number of visitors to two million by 2020.

Attending the event were members of the considerable ethnic Nepali community in Phuket, led by the Thai-Nepal Association President, Phanuphong “Daeng” Limbupraserkul.

The fun ended with a group dance, with guests joining the professional performers on stage for a dance similar to a Thai ramwong.

For more information about Nepal, welcomenepal.com.