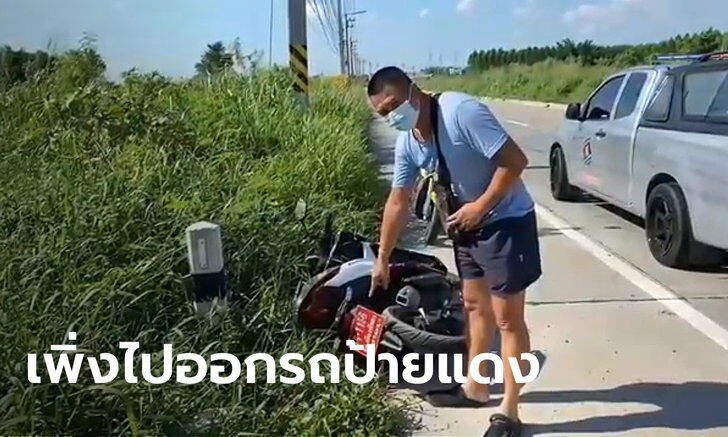 A motorbike driver in the northern Thai province of Uthai Thani has died from injuries he sustained after he drove into a utility pole. Witnesses said they saw a face mask covering the motorbike driver’s eyes and they believe it obstructed his vision, causing the crash.

Mew, a 43 year old Burmese national, had bought the motorbike only 1 hour previously to the accident. It was reported that the motorbike was still covered in plastic wrap from the bike shop. The accident occurred on a curved section of the road and a 10 metre long tyre mark was found trailing up to the site of the accident.

Witnesses at the scene attempted to “wake the man up”, and a local recuse team administered CPR, but the attempts were in vain. Mew died at the scene before they could get him to a hospital.

Thai media reports that Mew’s friends and coworkers had gone to look for him after he had been missing from a local factory for longer than expected. They were dismayed to learn that the accident they came upon was that of their missing coworker and friend.

Health Minister insists AstraZeneca vaccines will be delivered on time