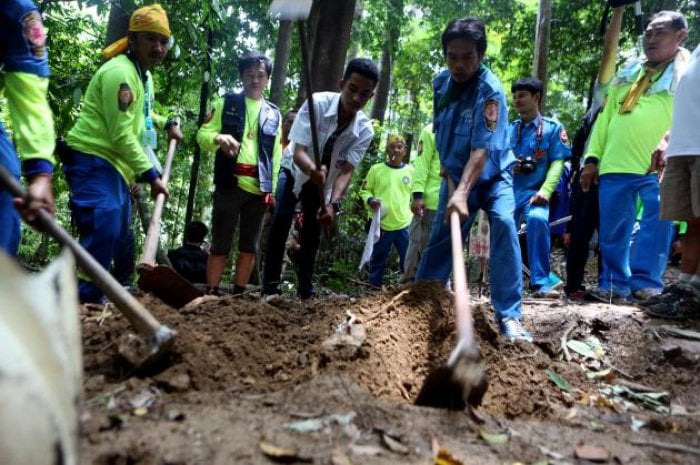 The warning came as five more graves were found at another jungle camp for migrants in an area bordering Malaysia.

The prime minister has instructed local administrators, as well as police and military officers to carefully scan their areas of responsibility to see if there is any human trafficking or other illegal activity, such as forest encroachment, drug trade, or severe crimes, deputy government spokesman Col Sansern Kaewkamnerd said yesterday.

Local administrators of all levels – villages, tambons (subdistricts) and districts – were ordered to comb their areas of jurisdiction to see if there was any illegal camp to hold migrants.

He said responsible officials would be moved out of their areas of jurisdiction, as punishment, if more cases of human trafficking were found.

“If there is any serious incident like one in Sadao district of Songkhla again, the officials involved will be moved out of their areas. It’s because they failed to enforce the law,” the spokesman said.

He was referring to the discovery of a mass grave site in Sadao district’s Padang Besar border area, where 26 bodies of migrants from Myanmar and Bangladesh were discovered recently near a jungle camp believed to be used for detaining illegal migrants.

He added that officials believed to turn a blind eye to such illegal activity would be moved out of their area and severe disciplinary action would be taken against them.

“The government must use strong medicine against all forms of crime,” the spokesman said. “This is to get rid of the deep-rooted evil from Thailand.”

Investigators probing human trafficking in the area have discovered five more graves at a second jungle camp believed to hold the remains of migrants from Myanmar and Bangladesh, police said yesterday.

No bodies were found in the graves.

The camp was uncovered just a kilometer from a similar “holding area” on a steep hillside near the Malaysian border, where forensic teams found 26 bodies over the weekend – all but one buried in shallow graves.

Police and rescue workers found eight deserted makeshift huts believed to have been used by migrants. They destroyed the newly-built huts in order to prevent them from being used by traffickers.

Separately, in the southern province of Phang Nga, governor Prayoon Ratanaseni and provincial police chief Gen Chalit Kaewyarat led a team of local officials to inspect an area used as a jungle camp for Rohingya in Takuapa district. They found a skeleton, believed to be of a Rohingya woman, buried in a Muslim funeral style.

Meanwhile, national police chief Gen Somyot Poompunmoung yesterday issued an order to transfer 15 police officers in the South out of their areas of jurisdiction, in connection with the probe into the trafficking scandal.

The officers included Satun police chief Maj Gen Sunthorn Chalermkiat, and seven more police colonels, most of them from Padang Besar station, whose jurisdiction covers the area where the mass graves were found.

In Ranong, which borders Myanmar in the Andaman Sea, Rohingya who have settled in Thailand for over 20 years disclosed that four unpopulated islands located between the two countries were used by human traffickers to hide illegal migrants before bringing them onto the mainland at Ranong.

The Rohingyas, who spoke on condition of anonymity, identified the islands as Yipoon, Kangkao, Kam and Noppaket. They were among those who hid on the islands or knew someone who did.