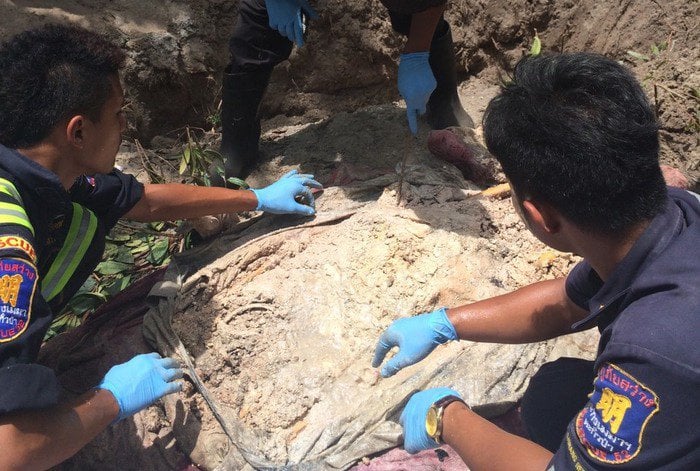 PHUKET: A suspected human-trafficking victim’s body was uncovered in a shallow grave north of Phuket in Phang Nga this morning.

The discovery follows the news of police uncovering mass graves in the Thai-Malaysian border province of Songkhla last weekend (stories here and here).

The badly decomposed body, believed to be that of a woman, was unearthed after officials launched a probe into a human-trafficking camp in Takuapa, Phang Nga.

“We were made aware of the possibility of human remains being buried at the camp after questioning two refugee boys taken into custody,” Phang Nga Governor Prayoon Rattanasenee told the Phuket Gazette.

The boys are staying in a shelter in Phang Nga, after they and about 80 other Rohingya refugees were arrested at the camp in October last year, confirmed the governor.

“The boys told us that they witnessed some of the adults being beaten by the traffickers, and that it was likely that some of them were killed and buried near the camp,” said Gov Prayoon.

“At this point we can only tell that it is the body of a woman, based on the height and the clothes found with her,” Gen Chalit said. “We have taken the remains to Takuapa Hospital to attempt to establish a cause of death and see if there are any signs of violence to the body.”

It is suspected that the woman was dead for months before the body was discovered.

Officers and rescue workers are continuing to search the area for bodies, confirmed Gen Chalit.

“The last arrest made in Phang Nga was in October, not because we have stopped hunting human traffickers, but because they are no longer using the same routes,” said Gen Chalit.

“We have successfully sealed off one corridor. However, I have no idea if they are simply using a different network by land, or if they are avoiding the province by taking them by boat farther south.

“After the mass graves were discovered in Padang Besar, I urged police and local officials to remain vigilant. However, I am confident that they have not let down their guard since October.”