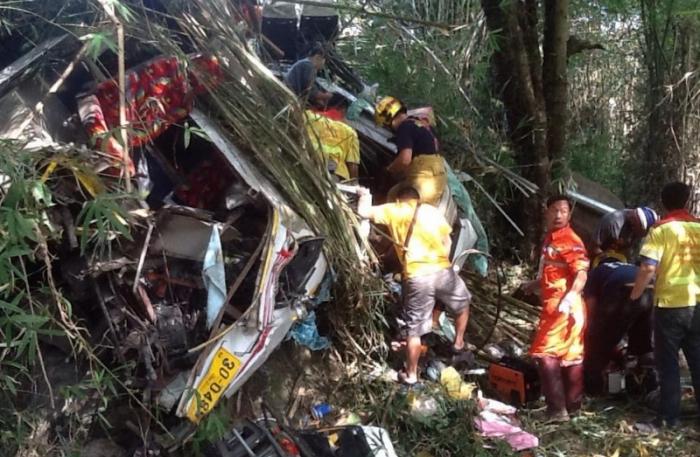 CHIANG MAI: At least 14 Malaysian tourists were killed and many others injured when their tour bus hit a power pole and ran off a mountainous road in Chiang Mai’s Doi Saket district yesterday.

Police said that the bus was on national highway 118 through Ban Pang Fan village between Chiang Mai and Chiang Rai provinces when the driver lost control at the 43rd kilometer marker.

Of the 21 Malaysian passengers on the bus, 14 were pronounced dead-on-arrival at the hospital and two were reported to be in a serious condition as of last night.

The bus, operated by Weerapan Tour, was carrying three other passengers, a tour guide, a bus conductor and the driver, identified as Somporn Bualuang, 58, police said.

The bus was allegedly fleeing after colliding with a car in the Danmae Kajan area of Chiang Rai. The driver of the car, Krissana Fongdawirat, was not injured, and attempted to follow the bus after alerting police, only to find that it had crashed, said rescue worker Uthai Pollaharn.

The bus was severely damaged, forcing rescue workers to pry open parts of the vehicle in order to extract victims.

Damages were estimated at about 8 million baht. Mr Uthai said there were many car accidents in the area but this was one of the worst he had seen.

The Malaysian Embassy has been informed of the accident.