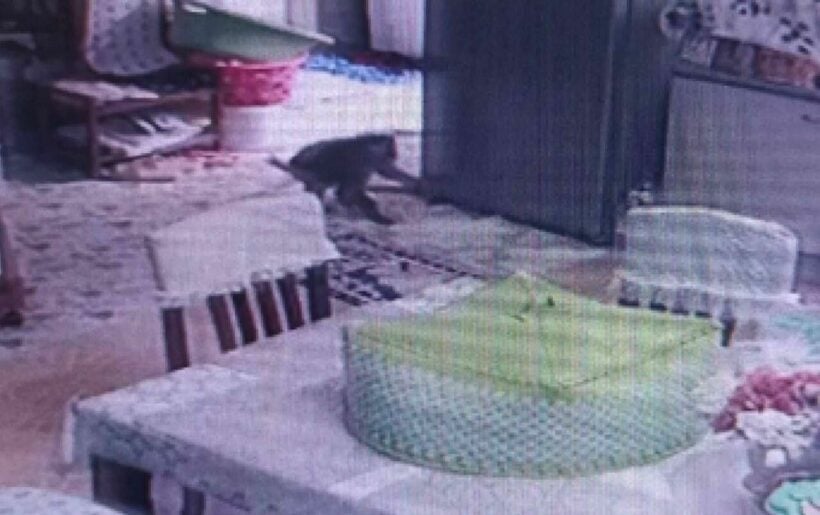 A monkey was caught sneaking into a home in Thailand’s Lop Buri province and stealing food from the refrigerator. Earlier this week, 59 year old Phimonthip Rungphant walked into her kitchen and found the monkey walking around the room eating her food. She says she had been wondering why her food seemed to be disappearing.

Lop Buri is known for its large macaque population. A historic temple in the city is now home to monkeys and an annual festival offers the monkeys a buffet of fruits. Other monkeys roam around the city, sometimes stealing water bottles and food from passersby. There even was a brawl last year with hundreds of monkeys fighting in the streets. Some say a group of monkeys encroached on another group’s territory, possibly due to lack of food.

A surveillance camera set up in her kitchen shows the monkey sneaking down from the roof and into her home, opening the fridge, and grabbing food. Phimonthip called the Animal Control Department, worried that the monkey could be dangerous to her children. The monkey snuck back into the home the next day, this time it lingered in the kitchen after it raided the fridge.

Officers from the Khao Somphot Non-Hunting Area used food to try to lure the monkey into a cage, but the monkey was not tricked. With animal control officers unable to catch the monkey, Phimonthip is now securing her home to prevent the monkey from entering and using a bungee cord to keep the refrigerator door shut. Phimonthip says she now wants to see the monkey’s reaction when it realises it can’t open the fridge.

Last month, another hungry animal broke into a kitchen looking for food. A wild elephant busted into a home in Prachuap Khiri Khan’s Hua Hin district, breaking through the wall. The elephant’s trunk reached into a shelf, knocking over kitchen supplies and grabbing what appeared to be a bag, then stuffing it into its mouth. The homeowner posted photos and videos, saying “comes every day” in Thai.