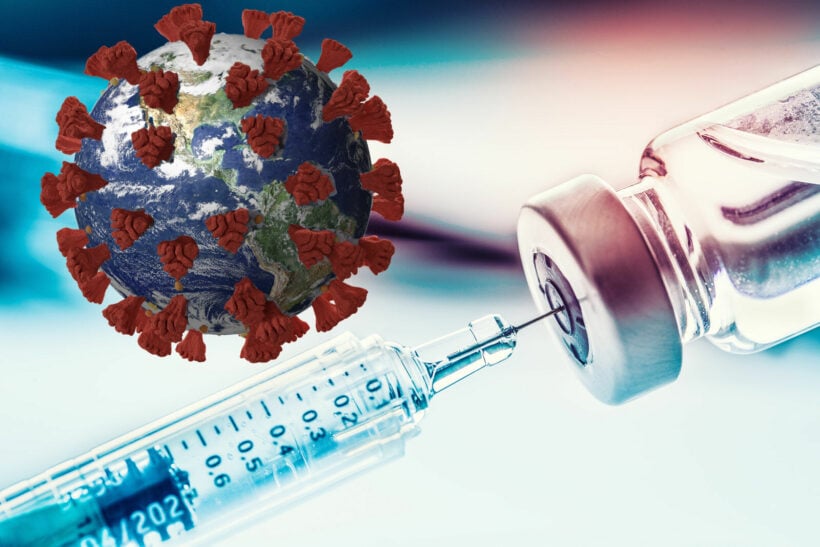 FILE PHOTO: While medical experts call for a ban on vaccine exports, legal experts warn of financial and reputation problems of a ban.

As the Covid-19 pandemic rages on in Thailand with growing numbers of infections and deaths, more and more medical experts are pushing for the government to intervene to stop Siam Bioscience from exporting AstraZeneca vaccines as the country experiences a shortage of vaccines to fight Covid-19 domestically. But legal experts are warning that this is a bad idea. A member of the Council of State took to his Facebook page to explain that stopping AstraZeneca vaccine exports would come with significant backlash in the court of law as well as the court of public opinion.

The council member, Borwornsak Uwanno, said that the benefits people are longing for must be balanced and compared with the risks and massive legal problems that would be created with a block on vaccine exports. As is often the case, contracts may stand in the way of the solution many are demanding.

Borwornsak said not only would barring vaccine exports possibly violate the constitution since it would go against current laws and the government is sworn to uphold all laws, but it would breach contracts that the government has with vaccine manufacturers. Siam Bioscience, a company wholly owned by a subsidiary of Crown Property Bureau, has been contracted by AstraZeneca to produce the vaccines in Thailand, both for domestic use and for sale internationally to neighbouring countries in Southeast Asia.

Blocking those international sales would break the contract terms of the very contract that allows the vaccines to be manufactured in Thailand in the first place. On top of that, it would breach numerous contracts with countries that have purchased vaccine quantities from Thailand’s production facilities.

The resulting legal ramifications could be in the tens of billions of baht in damages and penalties. On top of that, Thailand would be scorned by the international community and the rest of ASEAN for going back on its promises and obligations in order to help itself. The loss of credibility for Thailand and the ill-will created could come back to haunt the country for years to come, maybe even generations.

Health experts worry that Thailand may face huge surges in Covid-19 infections with one saying as many as half of all Thai residents could be infected by 100 days from now without mass vaccination of at least 500,000 injections per day. They are calling on any measures possible to procure vaccines including blocking the exports of AstraZeneca vaccines so they can be used domestically.s

Many agree though, that the leadership in Thailand ignored the advice and desperate urging of many scientists, doctors, and other experts who all stressed the importance of procuring vaccines early and in large quantities instead of waiting until production and orders were backlogged and vaccine shortages would become an urgent matter with the spread of Covid-19 domestically. Now the country finds itself in the unenviable position of choosing between keeping its export obligations and costing countless Thai lives or diverting vaccines to help its people but face massive financial punishment and become a pariah in the ASEAN community.

gummy
14 minutes ago, Anhlam78 said: I agree with both your statements, a contract is a contract in binding to deliver. Having said that, all legal contracts have a clause statement that if any of the following condition occur or can…
Grumpyoldman
I wonder what the owner of Siam Bioscience would think if contractual obligations were not met? The company was given the production rights on the basis of export contracts and domestic supply contracts with AZ. It was given in…
Mike
@Soidog your definition of “Force Majeure” is generally correct… However, we need to keep in mind that the language of the Force Majeure clause dictates 1) when and under what circumstances the clause may apply, 2) what constitutes an inability to…

Soidog
3 hours ago, Mike said: @Soidog your definition of “Force Majeure” is generally correct… However, we need to keep in mind that the language of the Force Majeure clause dictates 1) when and under what circumstances the clause may apply, 2)…
Mike
6 hours ago, Soidog said: I agree with what you are saying in principle @Mike. But would you have accepted a clause like that if you were buying vaccines from them? It’s like signing a contract to buy umbrellas…