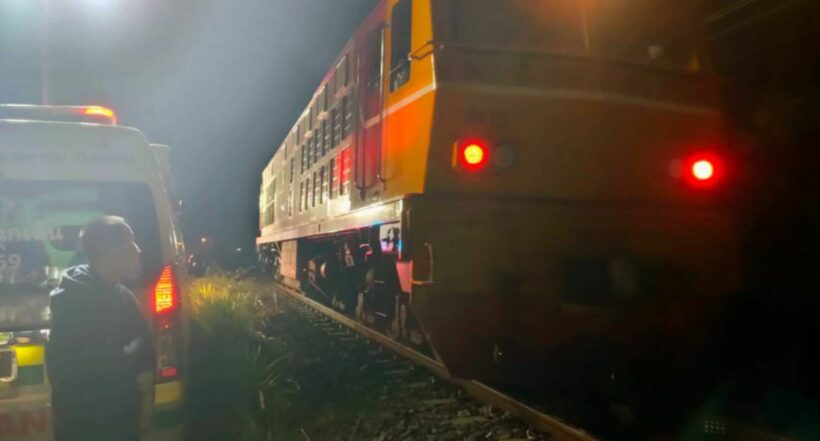 A Burmese man has been run over by a train outside a construction site camp in Udon Thani province, northeast Thailand, at around 9:30pm yesterday. The man’s colleagues said he was using the train tracks to support his head while he lay down and spoke on the phone when the incident happened.

In the grass, the body of 28 year old Mya Win was discovered with a broken neck, a fractured skull and exposed brain matter. The 317 Nakhon Ratchasima – Udon Thani train was found parked 800 metres away.

Mya’s colleagues testified to the police that Mya often drank alcohol and spoke on the phone at the scene of the incident. They expect he may have fallen asleep with his head on the tracks. The workers said the only place they have to relax is out the front of the camp near the train tracks because the inside of the camp is small, not well ventilated and hot.

Mya’s 28 year old colleague Udon Laopom, a construction worker from Nong Khai province, said he last saw Mya lying down on the tracks speaking on the phone. Udon went into the camp to have a shower and when he came out, he discovered that Mya had been hit by a train.

Another colleague, 46 year old Siam Sirilap, said the deceased was a Burmese labourer who installed sanitary ware. Siam said that Mya had moved from a construction site in Koh Samui, Surat Thani province, about one year ago.

A 23 year old construction worker named Dao, from Phitsanulok province, said that Mya was a quiet man who didn’t speak much at the camp. Dao said Mya spoke on the phone every day at the scene of the incident, probably because he could get a good signal outside and because it is much cooler outside than inside the camp.

Police from Muang Udon Thani police station said they found no traces of fighting or foul play at the scene. All of the construction workers’ testimonies lined up, according to police.

Mya’s body was initially taken to Udon Thani Hospital and will be returned to his relatives.

Soidog
FFS! Worthy of my favourite Gif
Grumpish
Has he been nominated for a Darwin Award yet?
HolyCowCm
Probably tired and fell asleep. Too bad and let's hope he died quick.
Alavan
Laying your head on train tracks wouldn't I call accidentally.