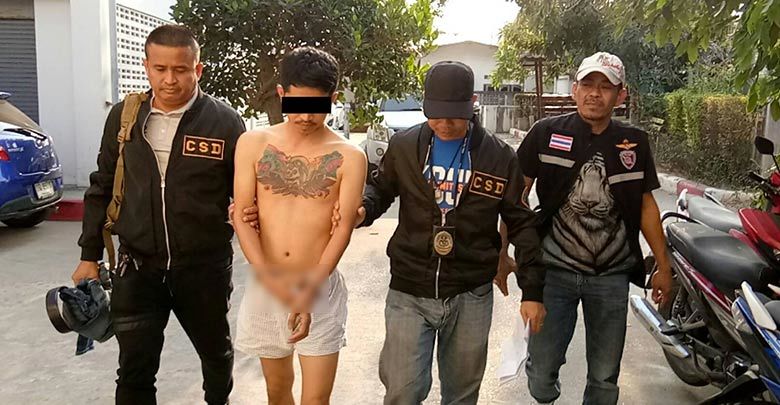 PHOTO: After operating around several provinces, he was eventually nabbed in Chonburi - INN News

A man has been arrested Chon Buri after organising to meet girls for a “night of fun” but robbing them instead in their own homes. Crime Suppression DivisionPolice arrested 28 year old Suchin in the Panas Nikom District this week. The warrant was issued by the Uthai Thani Provincial Court, but it wasn’t the only court after the man.

Last August 2019 one of the victims described to police that she met Suchin on a dating app. They chatted for a while and agreed to meet up at the girl’s house for some consensual fun together. She alleges that, when they met, he drugged her with sleeping pills and, when she woke up, Suchin was gone along with all her valuables.

Police say the robbery involved items valued at around 100,000 baht. This case happened on August 1 in Uthai Thani.

Later it emerged that Suchin had used the same modus operandi with women in different provinces. Eventually there were 4 arrest warrants issued out in his name from 4 different courts – Kanchanaburi Provincial Court in March 2019, Southern Bangkok Criminal Court in May 2019, Uthai Thani Court in August 2019, and Kalasin Provincial Court in September 2019. In all cases the scenario followed the same pattern. When Suchin was arrested he admitted to all crimes and will appear in provincial courts out of Chon Buri in the months to come.

Romeo robber arrested for drugging women in their homes