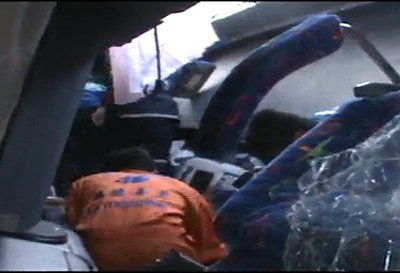 MCOT
Ten people have died and 17 others were injured, some seriously, when an inter-provincial bus left the road and crashed into an electric power transmission pole this morning.

Amongst those killed were the driver and Amit Jain, an Indian national. Five others have not been immediately identified and were sent for autopsies at Surat Thani Hospital.

Another 17 passengers, including both Thais and foreigners, were injured and are being treated in local hospitals.

The bus, carrying 24 passengers, the driver and two bus attendants, left Bangkok at 7.50pm on Monday evening en route to Phangan Island in the southern province of Surat Thani.

According to the initial investigation, the front right tyre burst, causing the driver to lose control and hit the electric pole at full speed.

Electric transmission wires were ripped apart and gas was leaking from the disabled bus. Local authorities cut the electricity, while a responding fire truck stood by at the crash site.