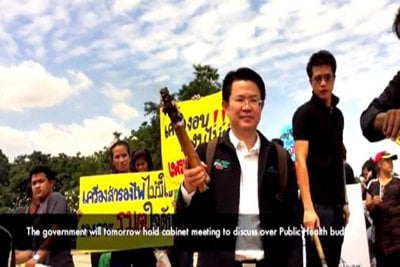 PHUKET: Military leaders appear to be on the horns of a dilemma over whether they should stay out of politics, while standing at the center of the political landscape with opposing camps vying for their support.

In the face of escalating polarization between the Pheu Thai and Democrat parties, Army chief General Prayuth Chan-ocha has been pestered by reporters to comment on the political situation.

As the two major parties try to sway sentiment and outwit one another, Prayuth opts for a survival strategy of sweet talk for all sides.

He has instructed his officers to be cordial to the coalition and opposition while staying on the sidelines as observers to the political tug of war.

His chief of staff, General Sirichai Distakul, is working hard to implement a myriad of government projects assigned to the Army. Meanwhile, his deputy, General Dapong Ratanasuwan has been in close contact with government opponents, particularly the Democrats and those in the People’s Alliance for Democracy.

The Army chief is keeping his cards close to his chest. In the Democrat-Pheu Thai spat over the request by NASA to conduct weather research at U-tapao air base, he made ambiguous remarks that could be construed as pro-government but stopped short of debunking the opposition’s concern about regional security.

In light of the mushrooming mass rallies, the Internal Security Operations Command has turned a blind eye to the current agitation. The pro-government camp has free rein to mobilize the red shirts. The anti-government camp is equally free to counter the red rallies.

While opposing camps compete to stir up the masses, the question is how long the Army can afford to remain on the sidelines?

If politicians keep on fueling social divisions, then it’s a matter of time before Prayuth is forced to show his cards.

PHUKET: A group of 200 physician-members of the Rural Doctor Society and Patient Network yesterday gathered at the Public Health Ministry to demand it release more than Bt3 billion to purchase life-saving medical equipment.

” We have not had budgets to buy new and modern equipment to save patients’ lives in rural areas for more than 30 years,” said protester Dr Somchaichote Piyawatch, a director of Mahasarakham province’s Chiang Yeun hospital.

Somchaichote said he had asked government for funds to buy new medical-instrument sterilizers, ultrasound machines and X-ray computers to replace old and much-repaired equipment that had been in use since 1981 and could threaten patients’ health.

” The X-ray machine has been used for 30 years. We have fixed it again and again. Sometimes, we’ve had to borrow one from a nearby hospital as we were afraid ours would release radiation and affect patients,” Somchaichote said.

“If we do not get this budget from government, the hospital will get into trouble as we have to spend over Bt100,000 a year to maintain the X-ray machine,” he added.

Rural Doctor Society’s senior advisor Dr Arak Wongworachart, a director of Nakhonsrithammarat province’s Sichon Hospital, said all hospitals nationwide had backed the proposal under the previous government for a Bt9.8-billion budget to purchase medical devices. But this proposal was cut from Bt9.8 billion to Bt3.4 billion to cover 600 community hospitals with 60 beds, 100 secondary hospitals with 60 to 120 beds, 69 tertiary hospitals and 26 centers of medical excellence.

The budget was later trimmed further by Public Health Ministry permanent secretary Dr Paijit Warachit in his role as chairman of the committee to screen purchasing of medical devices. The committee cut Bt700 million to Bt800 million of funds initially allocated to buy medical devices for rural hospitals.

Dr Kriangsak Watcharanukulkiat, the Society’s president, said he had made a half-hour plea directly to Witthaya to convince the cabinet to release these funds. He also asked former public health Minister Chalerm Yoobamrung to support Witthaya in defending the budget from the cabinet.

” Witthaya and Chalerm promised they would help us. Now we have to wait and see,” he said.

Witthaya said the decision on the budget to support rural hospitals rested with the cabinet, but he would represent society’s demand at the cabinet meeting today at Government House.

However, he said the budget to buy medical devices had only been cut from Bt3.426 billion to Bt3.425 billion.

Of this number, about Bt2.049 billion had been allocated to buy respirators and anesthesia machines, about Bt615 million to purchase X-ray machines and automatic hand-washers, and Bt716 million to buy electricity generators and washing machines.

PHUKET: A much-wanted Thai criminal was involved in the robbery of two Chinese ships and slaying of 13 crew members on the Mekong River last October, a senior police officer has alleged.

Nine members of the Thai military have been implicated in the killings, along with Naw Kham, the leader of a notorious Burmese drug gang, extradited from Laos to Beijing two months ago.

The Thai suspect is Olarn Somphongphan, who has also been sought for his alleged role in the fatal shooting of a high-profile politician a few years ago, deputy national police chief Pol General Pansiri Praphawat said yesterday.

Olarn coordinated the ship attack and had history of taking part in drug deals, Pansiri said.

Olarn was allegedly part of a gun-for-hire racket which killed former deputy interior minister Santi Chaiwirattana a few years ago, he said. Olarn had been in hiding in Myanmar, protected by an armed Wa force, after he was acquitted of assassinating Santi.

In regard to the ship robbery and killings, which led to China implementing armed patrols on the Mekong, Pansiri said police had interviewed 109 witnesses and acquired arrest warrants for the nine military suspects.