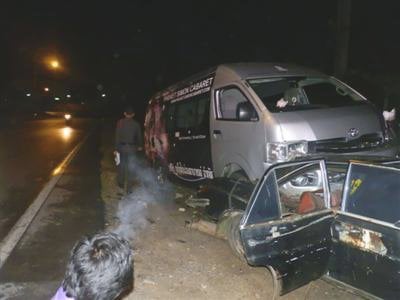 PHUKET: A Phuket Simon Cabaret passenger van, returning after dropping off guests, late last night slammed into cars parked outside a roadside garage in Thalang as the driver swerved to avoid an oncoming vehicle.

Thalang Police were notified of the crash at 12:30am today.

Arriving at the scene, on a curved section of Srisoonthorn Road about a kilometer west of the Heroines’ Monument, they found the van smashed into the back of an old Mercedes-Benz, one of several vehicles parked in front of the garage.

The impact sent the front of the van up over the rear of the old sedan, which was then thrust forward into the cab of a four-door pickup.

Mr Narong said he was returning home after dropping off foreign guests in the Cherng Talay area. As he rounded the curve heading toward the Heroines’ Monument, he suddenly realized that a westbound pickup truck driving in the wrong lane was heading straight towards him.

“It was as if the driver was drunk,” he told police.

Swerving to avoid a head-on collision, he went off the road and slammed the late-model Benz from behind.

Rescue workers said Mr Narong showed no signs of alcohol intoxication and was relieved to have survived the accident uninjured.

“If I hadn’t swerved, I probably would have been killed,” he told police.

The driver of the pickup continued without stopping.

Police took Mr Narong’s license, but discussions between the garage owner and Mr Narong seemed to indicate that all of the damages would be covered by insurance.