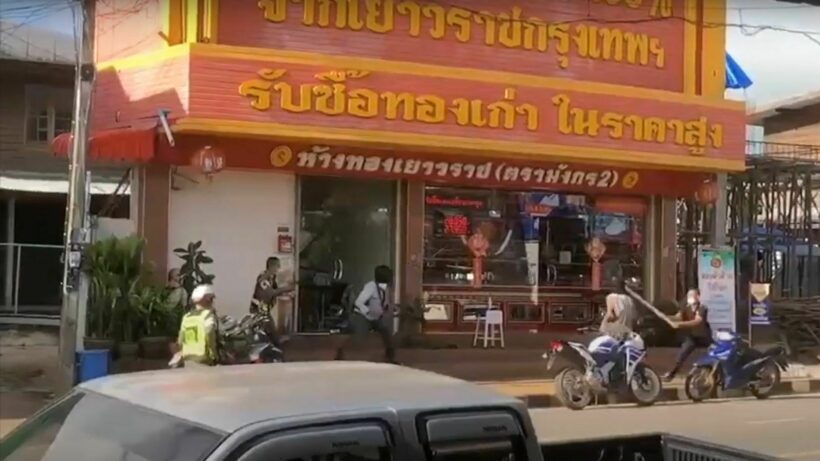 27 year old Detnarong Wannasang was arrested yesterday outside the Yaowarat gold shop in the Nakhu district. Police searched Detnarong and discovered 19 methamphetamine pills on his person. A few hours prior, police had been notified that a convenience store had been robbed. Following the first robbery, police checked CCTV footage to search for the culprit but were unable to determine who he was from the footage.

The following day, the man robbed the gold shop, but the owner of the shop alerted the police to the robbery. It is not clear what the man robbed the store of since police say they only found drugs on the suspect. Police have charged Detnarong with theft and possession of illicit drugs.

Footage of the arrest can be seen in the source link below.

MrStretch
44 minutes ago, Thaiger said: the man allegedly robbed a gold shop. Police arrested the man yesterday as he exited the gold shop, but they found only methamphetamine pills on him and no gold. No, he didn't. If he had…
Jason
I think there would be a noticeable rise in theft during the pandemic, in part brought on by businesses closing up because of lockdowns or lack of customers. People on low incomes or no incomes are really hurting because of…

AlexPTY
He probably watched the movie with Bryce Willis and Bob on Netflix
Malc-Thai
12 minutes ago, Jason said: I think there would be a noticeable rise in theft during the pandemic, in part brought on by businesses closing up because of lockdowns or lack of customers. People on low incomes or no incomes…
Bob20
13 minutes ago, Malc-Thai said: See it every day on the news here! Some dimwit stealing and looking straight at the cctv camera, or leaving their ID card or phone at the scene, then found later at their mums house!  …