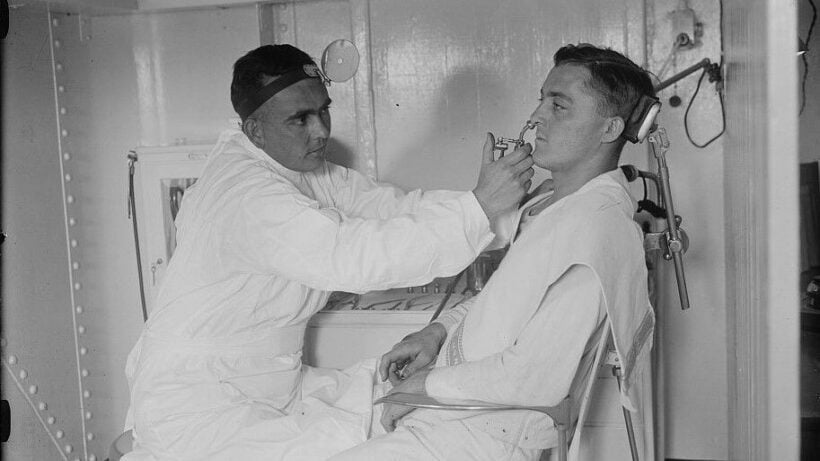 PHOTO: The Library of Congress/Flickr

Government officials announced today that 2 Covid vaccines that are delivered via a nasal spray and are homegrown in Thailand are going to start human trials… by the end of 2021. Officials say the vaccines already had promising results using mice.

The nasal spray was developed by the National Center for Genetic Engineering and Biotechnology. Government spokesperson Ratchada Thanadirek says the vaccines are based on the adenovirus and influenza.

Post-mice trials, the first human trials should start sometime at the end of this year. However, the vaccines still need the FDA’s approval. The trials are also intended to test their protection against the Delta variant. The second phase, which should begin next March has a target date set for wider release in “Mid 2022″…If the results are “good”, says Ratchada.

Previously, Thailand’s FDA had warned the public that “spray guns” are dangerous and ineffective.

Meanwhile, Thailand is also developing an mRNA vaccine through Chulalongkorn University and an inactivated virus is being developed by Mahidol University. Both vaccines should start the second phase of human trials this month.

2 days prior, Chulalongkorn closed its vaccine trial applications after enough people signed up.

Thailand has fully vaccinated just under 7% of its residents.

Jafagreg
Anything that might help is worth checking out. We need to get on top of this bastard virus.

Bluesofa
3 hours ago, Dedinbed said: 4 hours ago, Thaiger said: Officials say the vaccines already had promising results using mice Must be a pretty small spray if a mouse can use it Not to be sniffed at.

Dedinbed
22 minutes ago, Bluesofa said: Not to be sniffed at. As a kid I had a pet mouse called Elvis ..  but he got caught in a trap and couldn't walk out ..

BuffaloWhisperer
15 hours ago, Dedinbed said: Must be a pretty small spray if a mouse can use it ..  I've seen rats in Bangkok that would need nasal sprays the size of fire extinguishers.

gummy
6 hours ago, BuffaloWhisperer said: I've seen rats in Bangkok that would need nasal sprays the size of fire extinguishers. Well the PM would need one that size to fit his nostrils

Kratom legalised, over 8,000 people will have charges cleared