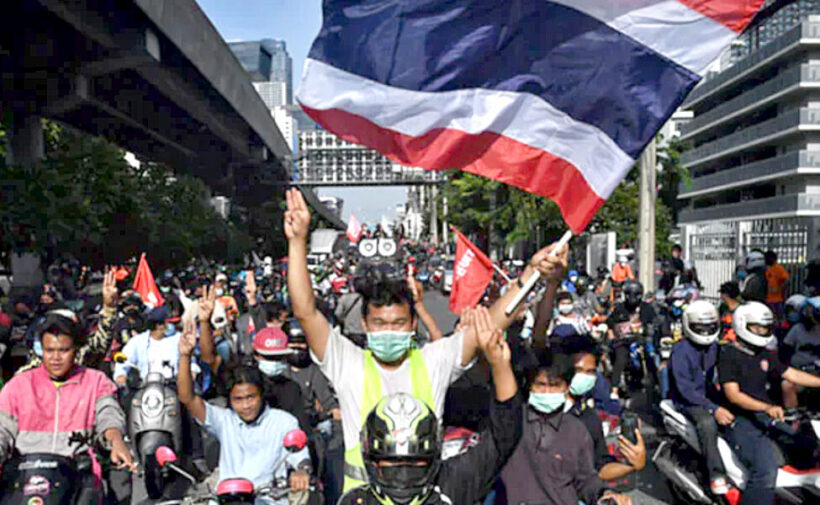 PHOTO: An attempt to bar police from using rubber bullets on activists and the press was dismissed by the Civil Court. (via NDTV)

After being injured by rubber bullets police fired at protesters despite being clearly marked as members of the press, a journalist with Plus Seven and a photographer from The Matter filed a lawsuit against the police. Now the Civil Court has responded, throwing out their petition to stop police from using rubber bullets as part of crowd control during protests.

When they filed suit Friday, the courts immediately dismissed charges against individual officers who are protected under a qualified immunity style law and denied an injunction against police using any force in protests. But they did allow the lawsuit against the Royal Thai Police to proceed where they requested 1.4 million baht, a formal apology, a pledge for no violence against the press, and for those who shot rubber bullets at press members to be identified.

In their lawsuit, the 2 media members said that they were hit and injured by rubber bullets in 2 separate incidents during protests on July 18 in Bangkok. There was some insinuation that police may have intentionally fired at press members, which could be viewed as an act of intimidation aimed at silencing a free press.

Yesterday saw more protests that are becoming increasingly impatient and aggressive. Protesters moved from Ratchaprasong intersection to Asok and made their way to Sino-Thai Engineering and Constriction, a company owned by the family of Deputy Prime Minister and Public Health Minister Anutin Charnvirakul. They accuse the company of financially supporting the government.

The roaming protest continued on to the residence of the controversial secretary-general of the Palang Pracharath Party Thamanat Prompow, who recently denied suggestions that he is prepping to become Thailand’s next prime minister. From there, protesters headed towards the King Power Group offices but clashed with police at a roadblock leading to PM Prayut Chan-o-cha’s residence.

During that clash and others later in the evening, some violence broke out, with fireworks thrown at officers, and a police kiosk being set on fire. Tempers were strong as bail has been denied to 9 important leaders in the pro-democracy movement including former hunger-striker Parit “Penguin” Chiwarak.

Poolie
8 minutes ago, gummy said: Whist they may censure the PM they know without him and somebody else in his place their gravy train will continue. However with a breakdown of law and order bringing an end to the corrupt…

gummy
15 minutes ago, Poolie said: Apart, of course, from the ones hurling rocks, ping pong bombs, traffic cones and anything else that comes to hand yes. Oh, and the ones setting fires at will, in Police boxes. I consider the…

Poolie
11 minutes ago, gummy said: I consider the media as the innocent bystanders which I clearly stated in my post. Or can you show any clips to indicate that it was them ( the media)  throwing rocks etc ? Really?…

Anti-government protesters in violent clashes with police in Bangkok