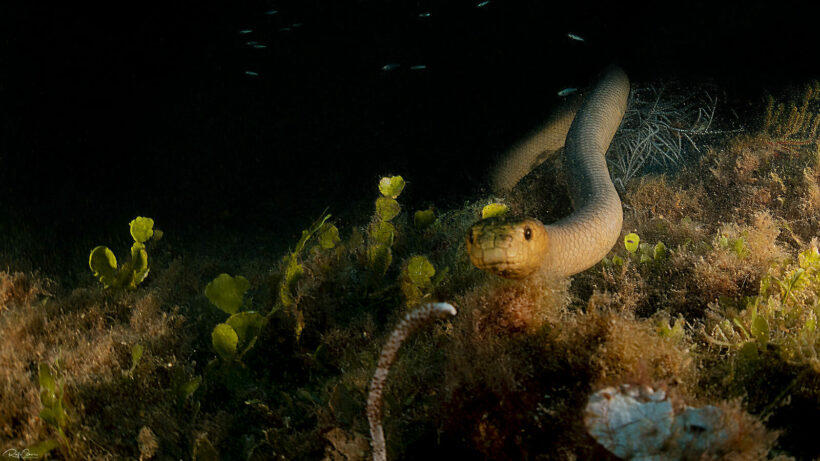 A new study says highly venomous olive sea snakes might “attack” scuba divers as part of the snakes’ courtship ritual. The news clears up some of the confusion for divers who have reported interactions with the snakes, which can grow over 2 metres long. The interactions include the snakes chasing and biting the divers. The study, published in Scientific Reports, suggests the male sea snakes may have confused the divers with potential rivals or mates, but the female snakes may just look at the divers as potential hiding places.

The snake study uses data collected by co-author Tim Lynch who has had over a hundred interactions with the sexually confused snakes. Tim’s accounts take place in the Great Barrier Reef in Australia from 1994 to 1995. About half of the snake encounters happened during the May through August mating season, for the snakes, not Tim.

Rick Shine, another co-author for the study, says at this time the male snakes begin their courtship of the females. The courtship includes the males flicking their tongues over the females’ bodies to make sure the female is of the right species and is in fact a female. The snakes may then align themselves to get down to business… but the report says the female snakes aren’t as down as the males are and often swim away. The study also says that male snakes are more likely to approach divers.

Large sea snakes cab be potentially fatal to humans, but the researchers suggest remaining motionless if a sea snake approaches. Then, people are advised to keep remaining still so the snake can “investigate” you with its tongue. “He just thinks that you may be a female snake. And once he works out that’s not the case, he’ll wander off to look for love elsewhere”, says Rick.

Dedinbed
1 hour ago, Thaiger said: interactions include the snakes chasing and biting the divers. Kinky .. though I think I'd hiss myself if they were chasing me ..
Jason
It's a bit like when sharks mistake humans as seals when they are dressed in black wetsuits (the humans...not the sharks)....I don't really know what the sharks are wearing....
Stardust
7 hours ago, Fluke said: This is actually a regular occurrence . I went to Pattaya for a holiday and I seem to recall a snake making those kinds of advances to me and it must have forced itself upon…