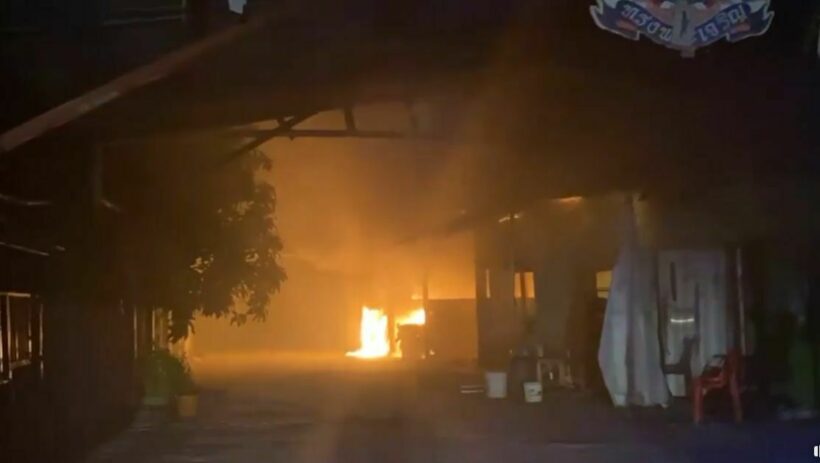 A 38 year old man was killed in a fire that broke out in his home in Pathum Thani, just outside Bangkok. Firefighters responded to the fire after midnight yesterday morning. It took around 30 minutes for firefighters to extinguish the flames. Udon Pulatabtang’s body was found in front of his room at around 2:30am.

Firefighters from the Suan Phrik Sub-district rushed to the scene after being notified about a fire. The charred remains of 38 year old man named Udom Pulatatang was found in front of room number 7. A blue car parked nearby by was completely destroyed.

Udom’s 63 year old neighbour, identified as Khai Noi Ai, noticed fire in Udom’s room and immediately called the fire department and police. He told the officers that he was sleeping until he heard a huge explosion-like noise. He saw that it was coming from Udom’s room when he looked out the window. He added that Udom was an electrician and his room is full of electrical appliances including air conditioners, refrigerators, and washing machines.

Udom’s brother, Chirachot Pulethatang told the officials that he was eating when one of his neighbours came to tell him that there was a fire in his brother’s room. When he arrived to the scene, his brother had already passed away. He also confirmed that his brother was an electrician for air conditioner and keeps a lot of old air conditioning equipment in stock to repair and sell them.