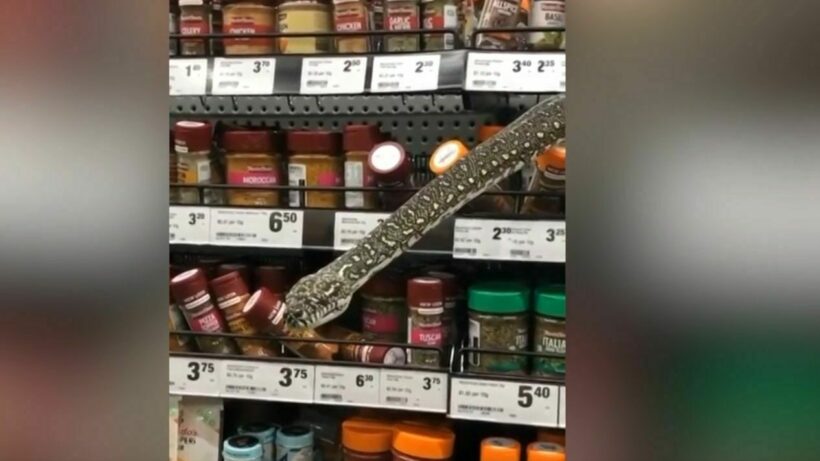 25 year old Helaina Alati, was shopping at a Woolworths when the 3 metre long snake pushed itself out of a shelf full of spices. Reportedly, the Woolworths supermarket is situated on edge of a wide expanse of bushland on the outskirts of the city.

Helaina, who happens to be a wildlife rescuer and has a familiarity was snakes, says she turned her head to see the snake about 20 centimetres from her face staring back at her. According to the BBC, she did a double-take from the spice shelf visitor but managed to stay calm.

The 25 year says she knew immediately the snake was a diamond python and that it wasn’t venomous.

“He was looking straight at me the whole time, almost like he was saying, ‘Can you take me outside, please?'”, says Helaina who filmed the encounter and then told staff about the python in their store, adding that she could help the store remove the reptile.

True to her word, Helaina got a snake bag from her house and went back to the grocery store. She says she tapped the snake on the tail, who then slithered into the bag. Helaina says she then released the snake, away from homes, into the bushland. Helaina says she has performed at least 20 snake rescues by now. She went on to add that the snake, possibly a diamond python, probably stayed in the store overnight likely starting off in the ceiling where diamond pythons prefer to nestle. Helaina adds that the snake may have been lurking on the shelf all morning as dozens of people passed near it, unaware of the 3 metre snake while they grabbed spices.

The Australian woman says her friends have made jokes in the past where they called her “the snake girl”. Helaina says snakes kind of gravitate toward her.

HolyCowCm
9 minutes ago, 23RD said: I know lots of girls here in Pattaya that are very handy at catching trouser snakes but I'm not sure if they could manage a python.  Let alone an anaconda.

Dedinbed
5 hours ago, Thaiger said: A python emerged from a grocery store shelf in Sydney, No worries they're armless ..  Whadya call a snake from Mexico ? Hisspanic ..  Baby snake " mommy are we poisonous ?? '' Mommy snake…

Benroon
49 minutes ago, 23RD said: I know lots of girls here in Pattaya that are very handy at catching trouser snakes but I'm not sure if they could manage a python.  Trust me - they can 😉

Benroon
41 minutes ago, HolyCowCm said: Sort of a provocative picture of her with part of her shirt hanging. And her nick name is the snake woman. I just wonder if it’s more ways than one.  You're putting way too much thought…
HolyCowCm
3 minutes ago, Benroon said: You're putting way too much thought into this....😁 Maybe. Wind down from a hard day and a non drinking weekday night to boot. Come on Friday!