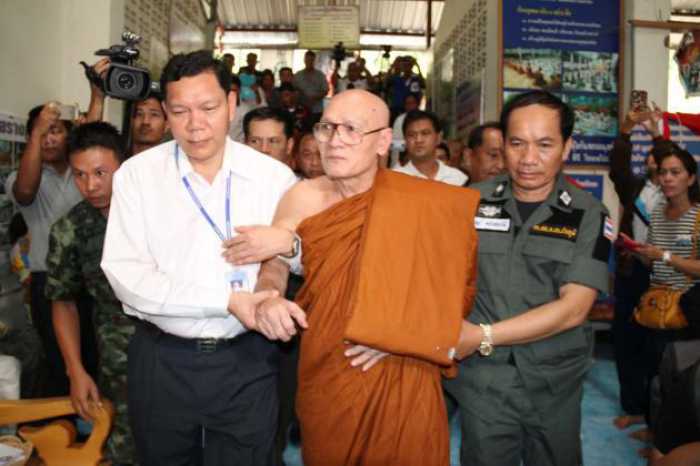 PHUKET: A renowned monk who was imposing his own death was rescued yesterday from a coffin at the order of the Chaiyaphum governor, who cited humanitarian reasons.

Luang Pu Phim, the abbot of Wat Weluwan in Khon San district, was taken to a local hospital after suffering from exhaustion, hydration, faintness and a heartbeat of 50-80 beats per minute.

He regained consciousness after oxygen and intravenous saline were provided at a special unit.

In media videos and photos, a team of public health officials was seen entering living quarters in the temple where a vented coffin was situated, and hauling the monk out of it. He had declared the shelter off-limits to his followers, after he entered the coffin at 9pm on Tuesday.

Dr Somsak Lohlekha, chairman of the Medical Council, had said that the monk’s self-imposed death, if successful, could have been regarded as a suicide, which would have made his followers liable to a criminal offence if they failed to stop him from going ahead.

The monk had told his followers to cremate his body today at 1pm. He reportedly planned this act once a few years ago, and privately repeated it to his followers, who then spread the word via social media.

The monk, 65, reportedly told his followers not to stop him, or even to enter this shelter. Crowds sat and waited while some monks recited prayers after 9pm, before the officials entered the temple and saved him, yesterday in the afternoon.

A close follower, Kulthida Prayooncharn, said she was happy that the rescue operation was performed, as all followers wanted him alive, but no one would defy his order. She said she learned from the officials who were accompanied by police and soldiers that the governor and the provincial monastic chief had jointly decided to stop his act and rescue him.

An unnamed follower said the monk had done something similar seven years ago, and survived after spending three days in a coffin. He said it was a drill to confront death, but this time he also ordered the cremation today at 1pm, which was later extended to 4pm.

Followers and temple-goers had donated money for a temple project – the planned construction of a bridge for public use.

Another unnamed follower said he regretted that the monk’s act was negatively received by the public and reported by the media. Luang Pu Phim was a modest monk who never benefited unfairly from donations, plus he never made or sold any amulets, he said.