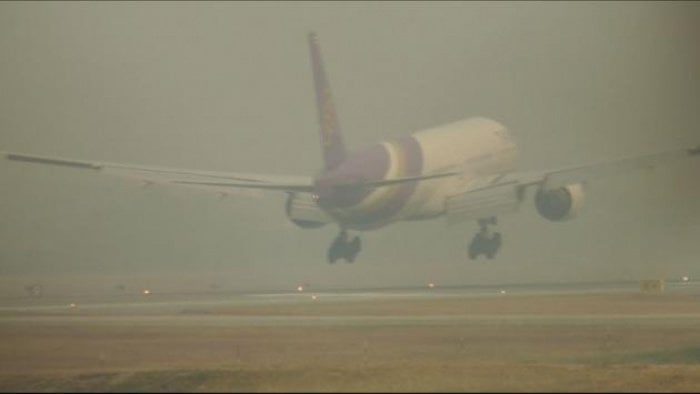 PHUKET: The volume of tiny dust particles in the upper North rose beyond the safety level again yesterday and poor visibility reportedly prevented at least four flights from landing at Chiang Mai Airport.

Meanwhile, a 60-year-old Mae Hong Son man was the first person arrested this season for violating the outdoor-burning ban, which is a key measure to alleviate the smog problem.

Readings of small particulate matter up to 10 microns in diameter (PM10) were very high at Mae Hong Son and Chiang Rai at 311 micrograms per cubic metre as of 1pm.

An informed source said that from 11am to 1pm, haze reduced visibility at Chiang Mai Airport to only 800 meters, which caused pilots to make a decision on whether to land.

At least four decided not to: Thai Airways Flight 102 from Bangkok had to u-turn to Suvarnabhumi Airport; SL 8504 (Lion Air) flew back to Don Mueang; while PG 241 (Bangkok Airways) from Samui and FD3161 (Air Asia) from Phuket landed at Mae Fah Luang Airport in Chiang Rai, which reportedly had its lights turned on to improve visibility.

Other flights to or from Chiang Mai continued as usual.

Meanwhile, in Myanmar, all flights to Tachilek Airport in Shan state were reportedly cancelled because of poor visibility.

In regard to the arrest for outdoor burning, Mae Hong Son Provincial Police commander Pol Maj-General Jaruek Limsuwan said yesterday that police used satellite data to detect hot spots. This led to the arrest on Sunday of Dang Maneejan, 60, as he burned weeds in his property during the ban period.

“Police are now taking violations of the burning ban seriously, so we ask people to avoid burning anything even in their own house area during the province’s 60-day ban period. And police can detect a fire from the satellite surveillance,” he warned. The ban period is March 1 to April 29.

In Phitsanulok’s Chat Trakan district, a wild fire ravaged around 500 rai (80 hectares) of forest. The blaze started on Sunday evening but was brought under control yesterday, although smoke affected 100 families living within a 2-kilometre radius.

The haze problem has hit local people’s health and daily lives, with thousands seeking medical treatment for respiratory problems. However, Isara Sathapanaset, director the Tourism Authority of Thailand’s Chiang Rai office, insisted yesterday that the tourism sector was not affected, as this is the low season.

After a joint private committee met yesterday to discuss the impact the 10-day haze is having on Chiang Mai’s tourism sector and economy, Chiang Mai Chamber of Commerce chairperson Wipawan Woraputipong said a survey showed that hotel bookings had not yet been cancelled.

However, visitors from other regions of Thailand have either dropped or postponed their visit to the province, she added. Calling on all sides to help solve the haze problem, she warned that the impact would worsen if the haze continued for a prolonged period. The joint private committee will also offer recommendations to the Chiang Mai governor later, she added.

Since the biggest contributor to haze was the burning of agricultural waste and setting fire to clear land, she said they could not just blame villagers. Instead, she said, the authorities should also look at business operators who buy the produce, like contract-farming companies or the public sector that supports cash crops.

She said these groups should be responsible of finding ways to properly dispose agricultural waste or the government could consider raising tax as a means of resolving the problem at the root.

We will try to cut use of military courts: Prayut