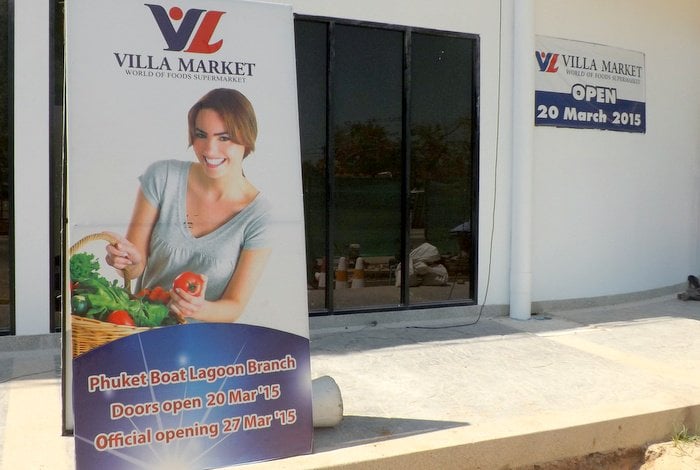 PHUKET: The doors to Villa Market’s third branch on the island open on March 20 with the Grand Opening Ceremony in Boat Lagoon taking place on March 27.

The grand opening, organized by Kanittha Prasopsirikul from ‘By Kanittha’, will be the highlight of the Boat Lagoon’s monthly Lighthouse Market, which offers a variety of vendors the opportunity to showcase their wears and services – something that Villa Market plans to start participating in either this month or next.

Villa Market’s Boat Lagoon branch will be classified as a “C” store with about 900 square meters of space, of which about 750sm will be retail – making it smaller than both the “A” class Chalong and Cherng Talay (Laguna) branches.

Despite the smaller size, the store will be no different than either of the other stores, Villa Market Area Manager Adrian Lanter confirmed to the Phuket Gazette. This will include Villa Market’s significant range of imported items not available anywhere else on the island.

The new market is expected to have little to no impact on the Chalong branch. However, Mr Lanter expects to see some migration of clients from the Cherng Talay branch, which will be monitored through Villa Market’s Vplus reward card information.

Mr Lanter and Villa Market’s business development manager, Stefan Cariola, will be using a multi-pronged approach to ensure that they attract as many new customers to the new store as possible.

The store will focus on yachties; parents of students at the British International School Phuket, who are forced to do the u-turn and head back toward Phuket Town after picking up their children; office workers and the multitude of people moving into the new developments in Koh Kaew.

Mr Lanter has set a conservative bar for Villa Market customers at the new branch at about 50 per cent, pointing toward both car-less yachties and residents in new developments in the area.

To cater better to the yachties, Mr Lanter is considering a club car delivery service within Boat Lagoon, which might be extended into the Royal Phuket Marina.

The prices at Villa Market for general goods – those that aren’t imported – are on a par with 7-Eleven, Makro, Tesco Lotus and SuperCheap, Mr Lanter confirms.

There will be outside seating at the new Villa Market for those wanting to eat ready-made meals, such as sushi, chicken, salads, sandwiches and so on. Currently, ready-made meals have been doing very well at both at the Chalong and Cherng Talay branches, so Mr Lanter expects to see similar success at Boat Lagoon. Additionally, BAKE has taken the reins as the bakery and cafe for the venue.

With ample parking space – an estimated 100 car slots – Mr Lanter expects the convenience of the location, as well as the quality of products, to make Villa Market the standard “neighborhood”
grocery store.

Phuket is already home to two of Villa Market’s most successful stores with the highest spending per capita, with Laguna taking the number-one position and Hua Hin keeping the Chalong branch at bay, making it the third highest out of 30 stores in Thailand.

Mr Lanter and Mr Cariola confessed that they would have to remain flexible after the opening and see which shopping trends arise in order to cater best to the varied client base and push the Boat Lagoon branch up the ranks, so it can eventually join Phuket’s other two branches at the top of the highest spending per capita chart.

Finance: Invest in your children