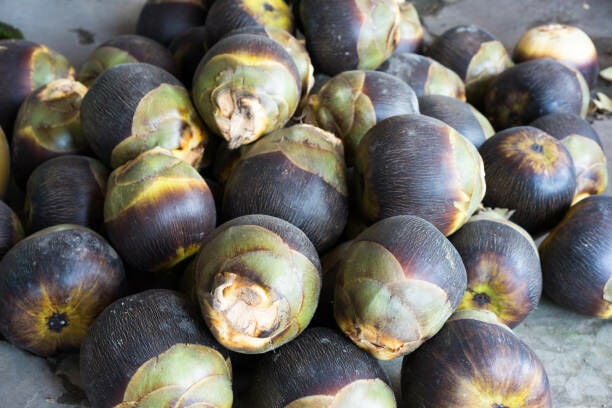 The body of an elderly lady was found lying face down beneath a palm tree in a rice paddy in the northeastern province of Nakhon Ratchasima this morning. The woman, 78 year old Dee Namchanad, was out cutting down toddy palm fruit to sell at the market when the fruit hit her in the head and killed her.

A 6 metre long stick of bamboo with a knife attached to it was found next to Dee’s body. Dee made a living by harvesting toddy palm fruit and selling it at a market in Non Sung district.

Toddy palm fruit, or palmyra palm, looks similar to a coconut. It is commonly used as an ingredient in Thai desserts.

Dee’s 45 year old relative Wiphawadee Wongnok said he was driving back from the market when he noticed someone lying face down under a palm tree in the middle of a rice field. When he got closer, he realised it was his relative, so he called for help, but Dee had already died from her injuries.

An autopsy at Non Sung hospital revealed that Dee died from a fracture to her skull. Her family are not suspicious of any foul play.

Dee’s body has been returned to her family who will carry out religious ceremonies.

Prosaap
I blame gravity
Fanta
35 minutes ago, Prosaap said: I blame gravity Me too. Gravity always drags me down.
HolyCowCm
Well she died doing something good she may have liked doing, and sounds like a pretty fast death which is a good thing. 78 is not so bad in an age.

PapayaBokBok
2 hours ago, HolyCowCm said: Well she died doing something good she may have liked doing, and sounds like a pretty fast death which is a good thing. 78 is not so bad in an age. Worse ways to go!…
DiJoDavO
4 hours ago, Prosaap said: I blame gravity Tomorrow in the news: Gravity kills people! We have to defeat gravity, because it's responsible for many deaths!!! If we don't eliminate gravity, we are all going to die!!!!