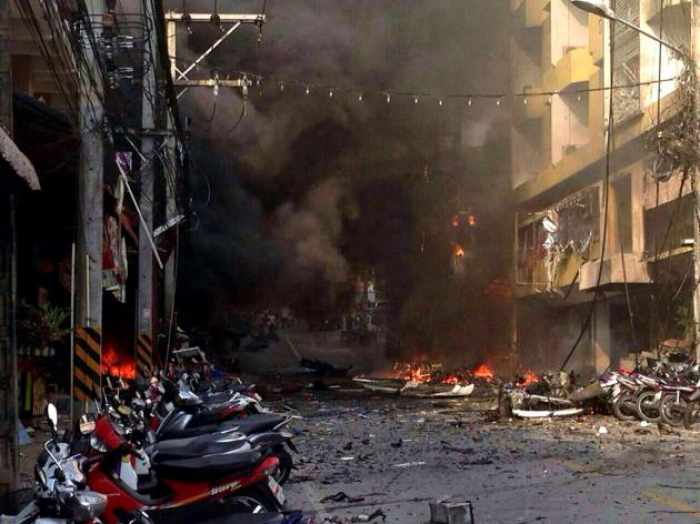 PHUKET: A car bomb exploded in Betong district in Yala yesterday evening, killing at least two people and wounding 34 others, three of them seriously.

The explosion also set nearby buildings on fire and caused major property damage.

Areas near the Holiday Hill Betong hotel, where the pick-up with the bomb was parked, were sealed off by security officials, who were still looking for more explosives possibly hidden nearby at press time yesterday.

The two killed were identified as Pennapa Tunhor, 23, and Decha Daliyoh, a man of unknown age.

The attack in Betong was a surprise as it has been one of the most peaceful cities in the far South, bustling with visitors and Chinese business people. It is believed that the attackers were exploiting the transfer of the security chief, he said.

Explosives Ordnance Disposal personnel said a white Mazda pick-up truck with a fake Betong licence plate was stuffed with 30kg of explosives, but Yala governor Dejrat Suebsiri said it was a Toyota Vigo.

Earlier yesterday, in Pattani’s Nong Chik district, a man was ambushed by several men while on his way to his wife’s home. The attackers fired two shots at him including one to the head. Police are investigating to see whether the killing was done by insurgents.

In Narathiwat, a roadside bomb was detonated targeting a 12-man squad on foot patrol, killing one and wounding three others seriously. EOD personnel said later that 5kg of explosive packed in a metal box was detonated via mobile phone signals.

The chairman of the Yala chamber of commerce, Nopphong Theeraworn, said Betong was a popular destination for Malaysians as the city was considered the safest in the far South.

In 2006, insurgents simultaneously bombed 22 banks in Yala in five districts including six in Betong.