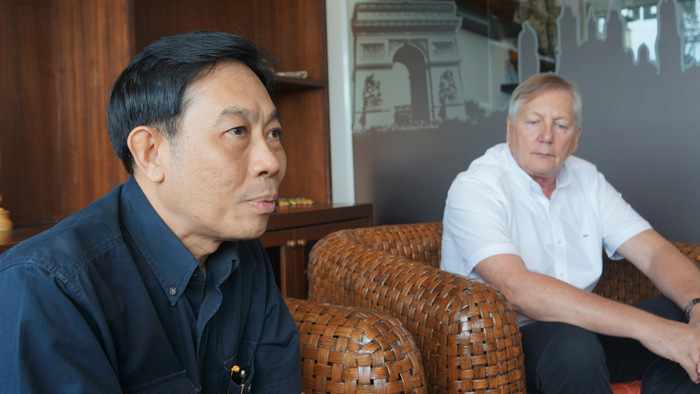 PHUKET: Three officers from the Chalong Police are expected to be charged with extortion and abusing their positions of power by the end of August, the Phuket Gazette has been told.

Lt Col Wannop Somjintanakul, the Public-sector Anti Corruption Commission (PACC) officer leading the investigation into the alleged extortion of more than 20 dive instructors at Chalong Pier in March, said he would present his findings to the PACC board in Bangkok in the coming weeks.

“We expect to press charges against the three officers by the end of August,” he told the Gazette this morning.

PACC Secretary-General Pravesana Mulpramook told the Gazette in May that, if found guilty, the officers faced 10 years behind bars and a dishonorable discharge from the Royal Thai Police (story here).

The case will be handed to the Phuket Public Prosecutor, who will review the evidence and decide whether or not to proceed with prosecution.

Mr Pravesana declined to name the officers, as did the case investigator today.

“Once the PACC board formally presses charges, we can reveal their names,” he said.

The impending charges relate to an incident on March 10, when more than 20 dive instructors were rounded up from Chalong Pier and escorted to the Chalong Police Station by Tourist Police and officers from the Chalong Police.

Capt Thada Sodarak of the Chalong Police confirmed to the Gazette that he was on duty at the time but was unaware of more than 20 dive instructors arriving at the station by police pick-up truck (story here).

At a meeting of more than 50 representatives from Phuket dive companies on March 22 (story here), Association of Thailand for Underwater Sports (ATUS) Secretary Pongsawan Sathatham explained, “More than 20 dive instructors were arrested at Chalong Pier on March 10, but no charges were pressed…

“Instead, we were told that police asked for money from the instructors.”

A total of 41 representatives signed a petition attesting that they had money extorted from them by the officers.

Chalong Police Superintendent Krittapas Dazintharasorn denied the allegations that his officers involved in extortion (story here), but within a week was temporarily removed from his post (story here).

The case went nationwide and 10 officers from the PACC arrived on the island investigating the allegations that Chalong Police officers extorted money from the Phuket dive community (story here).