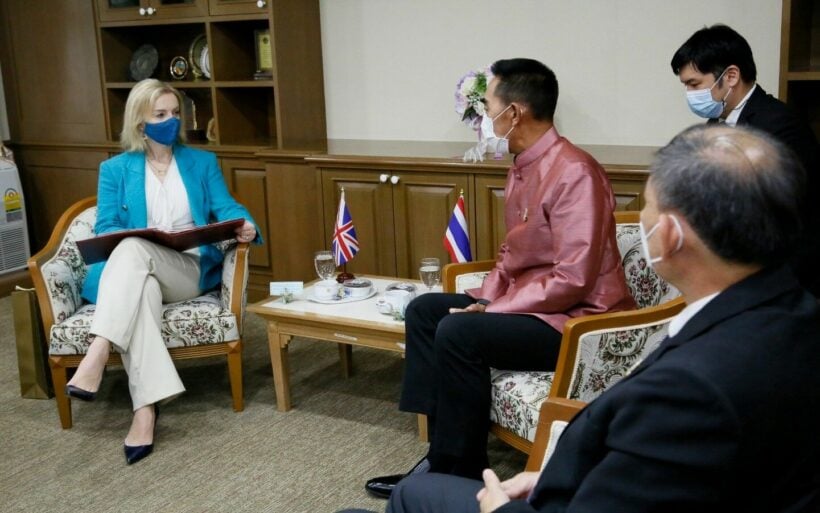 The UK’s Foreign Secretary, Liz Truss, has arrived in Thailand, where she will meet with PM Prayut Chan-o-cha and other government officials. Thailand is her second Southeast Asia stop, following a visit to Malaysia in which she met with PM Ismail Sabri and Foreign Affairs Minister Saifuddin Abdullah. The UK is seeking to strengthen its ties with Southeast Asia and other parts of the world in the wake of its withdrawal from the EU. Following her 2-day trip to Thailand, Truss will move on to Indonesia.

Thai PBS World reports that Truss touched down in Bangkok yesterday, for talks aimed at forging closer bilateral ties with the kingdom. She will meet with the PM and the Foreign Minister, Don Pramudwinai. They are expected to discuss how to boost the partnership between both countries in matters digital and tech, as well as improving collaboration on investment and security.

Bilateral trade between both countries is currently valued at around UK£4.7 billion (over 209 billion baht), with over 5,000 British businesses currently exporting to Thailand. Truss says the UK wants to deepen ties further.

“We want to step up our relationship with Thailand and take it to the next level in areas including tech, trade, and investment. We need a deeper relationship that reflects Thailand’s growing economy and positions Britain at the heart of the fastest growing parts of the world.”

While in Bangkok, the Foreign Secretary will also open the new British Embassy and tour the Triumph Motorcycle Factory. She will also host discussions between British and Thai firms on sustainable investment and the Building Back Better post-disaster strategy.

ThaiEyes
As long as it’s clear to the Thais what they’ll be getting out of it, I’m sure ties will be strengthened. I wonder what the UK would want out of this?

gummy
Just now, ThaiEyes said: As long as it’s clear to the Thais what they’ll be getting out of it, I’m sure ties will be strengthened. I wonder what the UK would want out of this? Neither nation will be getting…
Jason
The Brits have to cast the net wide to make up something out of leaving the EU.....

Soidog
I’m personally disgusted and ashamed that she is meeting with army generals. Utterly shameful.

gummy
4 hours ago, Soidog said: I’m personally disgusted and ashamed that she is meeting with army generals. Utterly shameful.  She is possibly looking for tips to pass on to Bojo as to how to deceive the nation, or else they…