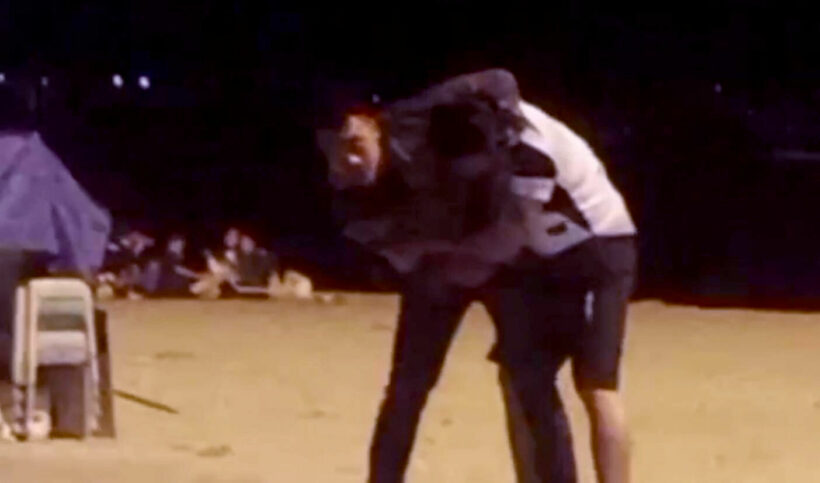 PHOTO: A fight on Pattaya Beach over an affair on TikTok. (via Pattaya News)

A fistfight that broke out and gathered a crowd on Central Pattaya Beach near the mall resulted in 5 people being arrested. Pattaya City Police were alerted of a fight at around 10:30 in the evening on Monday night and went to the scene to investigate.

In the patrol unit arrived, they found a few fights on and around the beach and a small crowd of teenagers who had gathered to watch the drama, with a few of the onlookers taking videos on their phones. The first fistfight was next to the beach and involved 2 men that were about 25 years old. The second fight was nearby on the beach between 2 women said to also be around the age of 25.

Aside from the four people physically fighting, a fifth person was taken into custody, though the Pattaya police did not specify whether they were taking part in the actual fight or involved in the melee in some other way.

The group had apparently met up at the beach as a safe public place to discuss some drama. One of the women was having an affair with the other’s boyfriend and had posted stories about the relationship on her TikTok account. The TikTok posts went viral and resulted in the man being fired from his job. They decided to meet to try to resolve to conflict, but the discussion quickly gave way to blows.

The police broke up the fighting, while each side blamed the other for escalating the argument to physical violence. All 5 people involved were charged with fighting in public and causing a public nuisance and were each charged a 1,000 baht fine.

The names of the people and the TikTok account in question were not released by the Pattaya Police, and the physical fight was said to have not resolved the dispute. But the police warned against public fighting saying that the city had a zero-tolerance policy for it.

JohninDublin
What I am having trouble understanding, is the involvement of the two women. Did both men bring their latest g/f's in which case, you'd have think that one of these was the "scorned woman"? That seems a dispute resolution strategy…

Bluesofa
1 hour ago, Faraday said: If they took Gummy's advice they could bet on who came first... The chicken, not the egg.
Stonker
7 hours ago, Bluesofa said: He was probably taking bets on who would win. So how many tourists did it attract?

Bluesofa
10 hours ago, Stonker said: So how many tourists did it attract? Both of them.

Pattaya Loy Krathong festival is a go, despite cancellation rumours