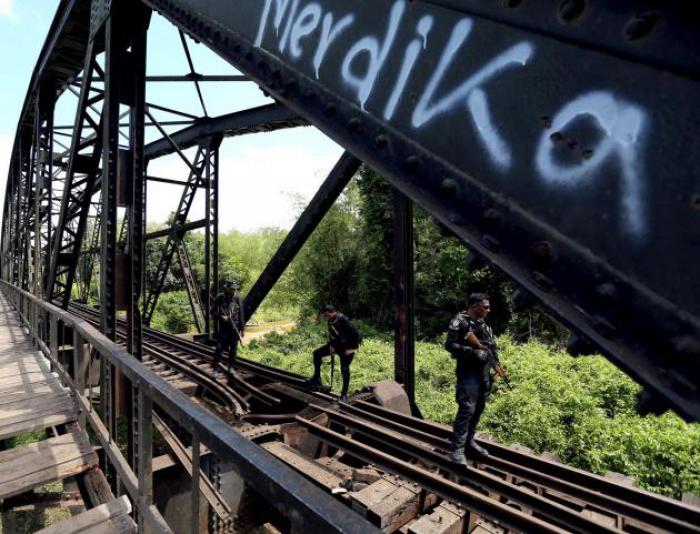 PHUKET: Fourteen local trains were forced to suspend services for three days after insurgents bombed the southern railway track in Narathiwat’s Joh I Rong and Rangae districts yesterday. Nobody was harmed in the bombings.

The damage done to the bridge necessitated the suspension of services with repair work expected to take at least two days to complete. The suspension caused disruption to passengers, especially students who travel to school by train.

Thanongsak Pongprasert, a senior State Railway of Thailand (SRT) official, said SRT engineers would inspect the damage and assess the extent of repairs today. Meanwhile, national security officials have cleared the railway in a bid to prevent further attacks.

Initial inspection found that |the section of railway between Tanyongmas station to Pa Phai station was more severely damaged than |the one between Bukit station |and Joh I Rong station, said Thanongsak. During the suspension of services trains will only be able to reach Tanyongmas station.

“The service suspension adversely affects people as many locals travel by train between Tanyongmas and Sungai Kolok such as religious schoolchildren, who were among those most affected by the disruption,” he said. He also affirmed that security officials were striving to prevent violence in the region, including through regular inspection of train routes.

In related news, as Ban Tha Sab School in Yala’s Muang district started its school term yesterday, director Wanpen Saetae said that the morale of teachers remains good and they are ready to perform their duties despite the unrest. She also urged those who carry out violent attacks on teachers to stop because teachers give children and youth knowledge, skills and virtuous values.

As the school received support from community leaders and parents in protecting the premises, teachers and students, she said that she was confident that no trouble would arise, although she urged security officials to provide more intensive protection to teachers.

Ban Tha Sab School, this term, saw an increase of almost 100 student recruits. Wanpae said that this showed members of the community remained acutely aware of the importance of education for their kids.