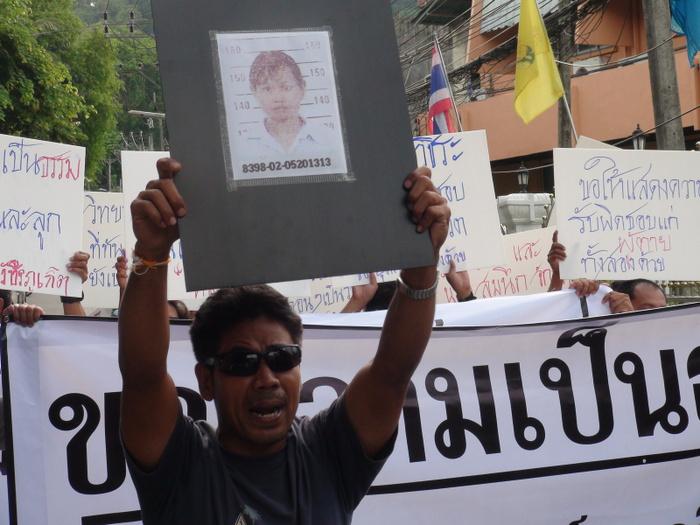 PHUKET: Patong suffered a short traffic jam yesterday afternoon as the grieving man who lost his wife and newborn son earlier this month led a traditional funeral parade through the city streets.

“I would like to apologize to everyone for the traffic problems. I had no intention to close the road, only to lead a funeral parade through Patong as part of a local tradition,” Numporn Intawong told the Phuket Gazette.

“It is time to send my son to meet his mother in heaven, so they can be together forever. One day, I will meet them there as well.

“I have been left all alone as I have lost the two most precious things in my life. I have nothing left to live for, and there is nothing left to inspire me except the fight for justice for my wife and son.”

Mr Numporn’s wife died during childbirth on May 2 and his newborn son died two days later. Mr Numporn led a protest in front of Vachira Phuket Hospital in Phuket Town last Saturday after he had not received an explanation for the deaths from doctors.

The protest prompted hospital officials to launch an inquiry on May 12 (story here).

Mr Numporn has not lost resolve in his mission for justice, and plans to keep appealing to the hospital and relevant offices until they can make clear to the public the details of what happened to his family, he told the Gazette.

“I want Vachira Hospital to take responsibility for my family’s deaths and to tell the public exactly what happened. I want this to be the last time this happens to someone,” he said.

“I will not stop. I plan to go to Phuket Provincial Health Office to talk to officers there about my case.”

Fingerprint scans to debut at Immigration to catch known criminals