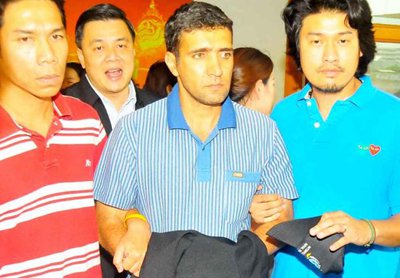 Confidence of tourists will be hit by blasts
PHUKET (The Nation): Tourism business operators believe that Tuesday’s bomb blasts in Bangkok will have a slight impact on the industry in the current first quarter of the year, according to a survey by the Center for Economic and Business Forecasting (CEBF) of the University of the Thai Chamber of Commerce.

However, further incidents would have a longer and larger impact on the economy – especially due to an increase in travel warnings issued by embassies, the number of which could exceed 20. Currently 13 embassies are posting terrorism warning messages on Thailand, said Thanavath Phonvichai, the CEBF’s director.

During the current quarter, the number of foreign tourists is expected to drop by 100,000-200,000 and the nation will lose 20 billion baht in tourism revenue, Thanavath said.

However, the situation will begin to rebound in the second and third quarters and the incidents will have a marginal impact on the economy of 0.1 – 0.2 per cent.

The survey was conducted on Wednesday, with 650 samples from trading, services, and production businesses. Of the total, 42.7 per cent were small businesses, 30.5 per cent medium, and 26.8 per cent were large.

Moreover, 51.1 per cent of the participants said they were not sure how large the impact on their business would be, while 45.7 per cent said they had not yet seen any impact.

Thanavath said the issue varied from country to country and included backpackers. For example, he said European tourists realized such incidents can happen anywhere, and this would have a slight impact on the industry. Asian tourists are quite worried, he said.

Bomb expert trained suspects
PHUKET (The Nation): One of the four Middle East men captured by security cameras during the blasts in Bangkok on Valentine’s Day was suspected to be a bomb expert who passed on his bomb making skills to the other three, police said yesterday.

Police also had the Southern Bangkok Criminal Court approve arrest warrants for the three Iranian men at the scene and an Iranian woman, Leila Rohani, 32, who reportedly has fled to Tehran, out of Thai police’s reach.

The wounded suspect, Saeid Moradi, 28, faces charges of making explosives, possessing explosives without a permit, causing explosions that endangered others and attempting to murder on duty police and other persons. The three other suspects are wanted for the first three charges.

In trying to determine if the explosions were related to the bomb attacks in India and Georgia, police have asked parties for more information.

Initially, the Bangkok bomb materials appear similar to what was used in the attacks on Israeli interests in other countries, in that magnets would affix the bomb to a car target, he added.

According to a source at the national security agency, prior to the first explosion at the suspects’ rented house near Sukhumvit Soi 71, witnesses said they saw an Iranian man in his 50s and 150160cm tall going out of the house with a large luggage case at about 7am.

Security footage showed that in the week before the blasts, this man went in and out of the house on a daily basis, the source said. He was also seen in the Thong Lor and Khlong Tan areas after the blasts and when Hazaei was arrested at Suvarnabhumi.

The man was suspected of being a bomber or taking explosive materials to teach the three Iranians to make bombs, the source said, adding that Israeli officials also gave information to Thai police in this case.

“We can’t ask Iran to send her back to Thailand as we have no extradition treaty with that country,” he said.

Rohani was suspected of being the one who rented the house where the three Iranian men stayed and where the first device exploded, apparently by accident.

Rohani’s absence would not affect the case, as she had only rented the house. Thai police have enough evidence such as footage from security cameras and bomb materials found in the house, he added.

However, police searched her room at the house and turned up some more evidence, but offered no details.

Deputy police chief Pansiri Prapawat said that, besides the four wanted Iranians, police were also gathering information for an arrest warrant for a Middle East man who might be involved and checking if he was still in Thailand.

Police would continue to comb the damaged house and search two or three other places that the four Iranians had been seen frequenting. The house had so far not shown any signs of any terrorist group. Suppliers should alert police if foreigners buy a suspicious amount of material that could be used in bomb making, he added.

Wanchai Rujanawong, directorgeneral of the Office of the Attorney General’s Foreign Affairs Bureau, said the extradition of Masoud from Malaysia would take some time. The agency was waiting for the submission of case documents from police, which would need to be translated, and would then proceed according to the Thai-British extradition treaty. Britain used to rule Malaysia. If that couldn’t apply, Thai authorities would try diplomatic leverage of reciprocal trade with Malaysia.

Dr Prasert Triwijitsilpa, deputy director of Chulalongkorn Hospital, said Moradi, who lost both his legs in one blast, was in stable condition and remained unconscious and on respiratory assistance. Doctors would keep him under surveillance for 72 hours for signs of infection.

Security tightened at Israeli Embassy
PHUKET (The Nation): Heavy security has been provided for the Israeli embassy – set in a tall building in central Bangkok – in addition to all international airports, following the three explosions on Tuesday, reportedly part of an operation to target Israel’s diplomats and interests in Thailand.
Fourteen countries, including Israel and the United States, have issued travel advisories urging their nationals against entering or traveling in Thailand. Foreign Minister Surapong Towijakchaikul said that the warnings should not be in effect for long, because “most suspects” had been arrested.
An academic on international security, Theeranan Nanthakhwang, said the three suspects were possibly preparing to target or kill Israeli Defense Minister Ehud Barak who was sch