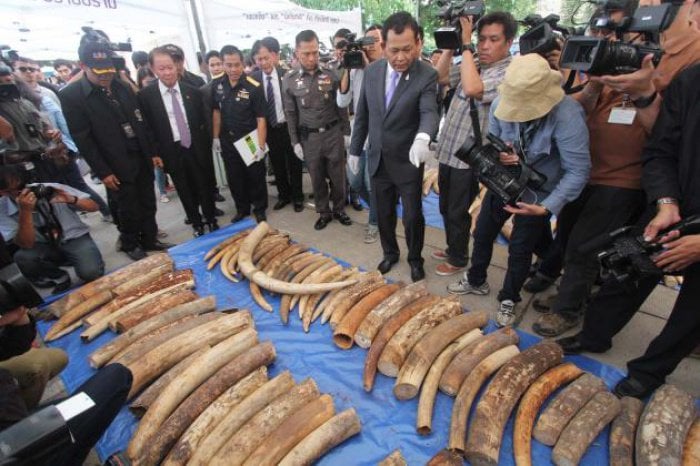 PHUKET: The Customs Department seized a total of 511 tusks, weighing 3.1 tonnes and worth 200 million baht, from a Laos-bound container at a private company’s bonded warehouse on Saturday.

Natural Resources and Environment Minister Gen Dapong Rattanasuwan told a press conference of the seizure yesterday. The container-load of tusks was sent from Mombasa in Kenya via ship and transported to Laem Chabang Port, in Chon Buri province, on Saturday.

It was initially declared as containing 11 tonnes of tea, Customs chief Somchai Sujjapongse said. Thai officials’ checking the container discovered the tusks among the tea leaves and seized them for legal action, he said.

Gen Dapong praised this and the department’s previous ivory bust which also seized 4 tonnes of African tusks on April 18. Gen Dapong said Thai authorities had asked for co-operation from neighboring countries to tackle the ivory trade. Police would now probe the origin of the tusks to try to catch traders and smugglers.

Previous data from the Convention on International Trade in Endangered Species of Wild Fauna and Flora (CITES) has shown that Thailand – and Laos – are major transit points for African ivory to other countries.

In a separate measure to curb the trade and smuggling and create a vast database, Thai authorities have urged all ivory collectors to register ivory items in their possession. A deadline ended last week.

The National Parks, Wildlife and Plant Conservation Department concluded that 38,003 ivory collectors had reported 200 tonnes of ivory products in their possession worth 10 billion baht. Officials will soon inspect these items, which will take a further two to three months to do.