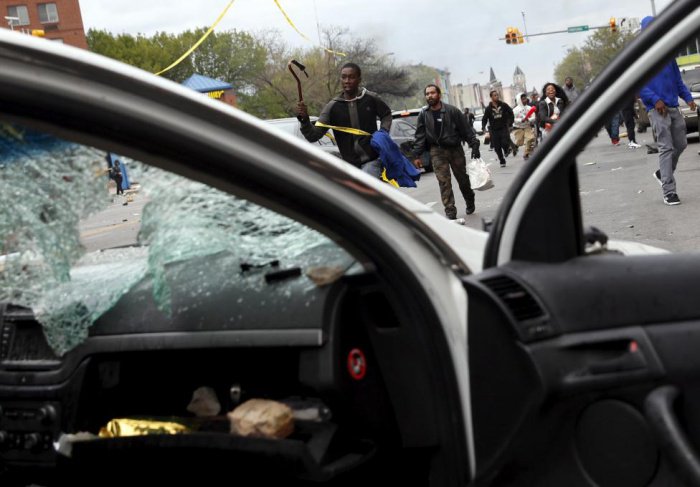 PHUKET: Baltimore erupted in violence on Monday as hundreds of rioters looted stores, burned buildings and injured at least 15 police officers following the funeral of a 25-year-old black man who died after he was injured in police custody.

The riots broke out just a few blocks from the funeral of Freddie Gray and then spread through much of West Baltimore in the most violent U.S. demonstrations since arson and shooting in Ferguson, Missouri, last year.

A large fire consumed a senior center under construction near a church in East Baltimore on Wednesday night, television reports showed, but it was not immediately clear if it was related to the riots.

Maryland Governor Larry Hogan declared a state of emergency and activated the National Guard as firefighters battled blazes set by looters. Police made at least 27 arrests and Baltimore schools said they would be closed on Tuesday.

Gray’s death on April 19 reignited a public outcry over police treatment of African Americans that flared last year after the killings of unarmed black men in Ferguson, New York City and elsewhere.

Police in Baltimore on Monday used pepper spray on rioters who had sacked check-cashing and liquor stores. Looting spread to a nearby shopping mall and rioters smashed car windows outside a major hotel.

Rioters twice slashed a fire hose while firefighters fought a blaze in the afternoon at a CVS pharmacy that had been looted before it was set on fire.

An Orioles baseball game was canceled and schools, businesses and train stations shut down in the city of 662,000 people 40 miles (64 km) from the nation’s capital.

“All this had to happen, people getting tired of the police killing the young black guys for no reason. … It is a sad day but it had to happen,” said Tony Luster, 40, who is on disability and was out on the street watching the police line.

A string of deadly confrontations between mostly white police and black men, and the violence it has prompted, will be among the challenges facing U.S. Attorney General Loretta Lynch, who was sworn in on Monday.

Following her swearing in, Lynch condemned the “senseless acts of violence” and signaled that improving relations between the police and the communities they protect will be high on her agenda.

Later, while scenes of riots were broadcast on television, she briefed President Barack Obama.

The extent of the rioting – much of it in a neighborhood where more than a third of families live in poverty – appeared to catch Baltimore officials somewhat off-guard after a week of peaceful protests.

After Missouri was criticized for a heavy-handed response to protests over the police killing of unarmed black teenager Michael Brown in August, cities from Madison, Wisconsin to New York have tread a careful line between allowing peaceful demonstrations over police brutality and preventing violence.

Gray’s family had pleaded for peaceful demonstrations and after the looting started, pastors and community leaders took to the streets to try to prevent violent clashes between black youth and police.

Looters were nonchalant and showed their faces.

“We went in there and tore it up,” said Tyrone Jackson, 16, wearing a hoodie and a thin mustache. He said he was one of the looters inside the CVS.

Just down the street from the smoldering CVS, business owner Daisy Bush, 61, said: “The sad part about it is that a lot of people from the community were up there in the CVS, stealing stuff out of it. It’s a disgrace.”

Earlier in the day youths threw rocks and bricks at police. Several officers had broken bones, the police department said.

The largely black city has long struggled with high crime and gangs, a reputation that has made it the setting for gritty television police dramas such as “The Wire.”

At Gray’s funeral, speaker after speaker before the crowd packing the 2,500-seat New Shiloh Baptist Church said the world was watching to see if justice would be done for Gray.

Gray was arrested on April 12 when he fled from police in a high-crime area. He was carrying a switchblade knife, and he was put inside a transport van to be taken to a police station.

At some point, Gray suffered the spinal injury that led to his death a week later. City Police Commissioner Anthony Batts said on Friday that officers failed to belt him into his seat securely and to give him timely medical attention.

Police have said they would conclude their investigation by Friday and forward the results to state prosecutors. Six officers have been suspended, and the U.S. Justice Department is investigating the incident for possible civil rights violations.

Thousands of police descend on Baltimore to enforce curfew after riots