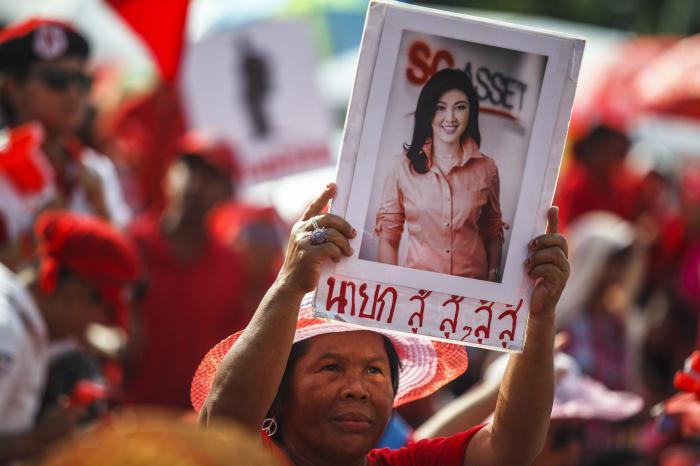 No plans to crack down on red shirts: King’s Guard chief
The Nation / Phuket Gazette

This was in response to an announcement at the red-shirt rally site on Aksa Road by United Front for Democracy against Dictatorship (UDD) chairman Jatuporn Prompan that the Army was planning to crack down on the protesters and urged them to turn out in larger numbers. Jatuporn claimed that the First Army Division had been told to suppress the red shirts in the same way as they were in 2010. However, Apirat said the Centre for Administration of Peace and Order (CAPO) had ordered his division to ensure security on Aksa Road and take care of the protesters.

He added that troops from the 9th Infantry Division were deployed to guard the crowds.

An Army source said Jatuporn was using this an excuse to encourage more red shirts to join the rally, which kicked off on Saturday.

Meanwhile, CAPO’s Tarit Pengdith said yesterday it was clear that members of the People’s Democratic Reform Committee (PDRC) had invaded Government House by cutting the chain and climbing over the fence without the military’s consent.

The CAPO, military and police officers will hold a press conference on the issue today.

Separately, Colonel Banphot Poonpien, spokesman for the Internal Security Operations Command (ISOC), said the agency was still waiting for an answer from the Election Commission and Council of State as to who will take over as ISOC director now that Yingluck Shinawatra has been dismissed.

As for the request to see if Robert Amsterdam, a Canadian lawyer who represents former PM Thaksin Shinawatra, is affecting Thailand’s security, Banphot said this matter should be taken to the Immigration Police or Interior Minister. Amsterdam was seen delivering a speech at the red-shirt rally stage.