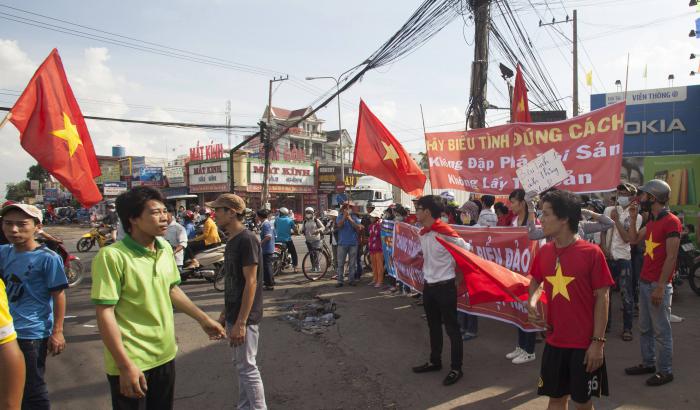 PHUKET: More than 20 people were killed and rioters attacked Vietnam’s biggest steel plant overnight as violent anti-China protests spread to the centre of the country a day after arson and looting in the south, a doctor and newspapers said on Thursday.

A doctor at a hospital in central Ha Tinh province said five Vietnamese workers and 16 other people described as Chinese were killed in the rioting, one of the worst breakdowns in Sino-Vietnamese relations since the neighbours fought a brief border war in 1979.

Hundreds of Chinese had fled Vietnam, either by air or by crossing into neighbouring Cambodia, reports said.

Taiwanese media said rioters attacked a huge steel plant in Ha Tinh province owned by Formosa Plastics Group, Taiwan’s biggest investor in Vietnam. When completed in 2020, it will be Southeast Asia’s largest steel plant and will include a seaport and a 2,150 MW power plant. Local media in Vietnam has said the complex could cost about $20 billion.

The anti-China riots erupted in industrial zones in the south of the country on Tuesday after protests against Beijing placing an oil rig in a part of the South China Sea claimed by Hanoi.

The brunt of the violence has been borne by Taiwanese firms, mistaken by the rioters to be owned by mainland Chinese.

Officials from Formosa Plastics were not immediately available for comment.

Thousands of Vietnamese set fire to foreign factories and rampaged through industrial zones in Binh Duong and Dong Nai provinces on Tuesday, officials said. There were no confirmed reports of any violence later in that area.

In Binh Duong alone, police said 460 companies in the province had reported some damage to their plants, local media reported.

“More than 40 policemen were injured while on duty, mainly by bricks and stones thrown by extremists,” the state-run Thanh Nien (Young People) newspaper said.

About 600 people were arrested for looting and inciting the crowd, the newspaper quoted Vo Thanh Duc, the police chief of Binh Duong province, as saying.

The United States has called on both sides for restraint.

Such disputes “need to be resolved through dialogue, not through intimidation,” White House spokesman Jay Carney told a regular briefing. “We again urge dialogue in their resolution.”

The U.S. State Department said it was monitoring events in Vietnam closely, and urged restraint from all parties, while adding: “We support the right of individuals to assemble peacefully to protest.”

The current crisis erupted within days of a week-long visit to Asia by President Barack Obama in late April in which he pledged that Washington would live up to its obligation to defend its allies in the region.