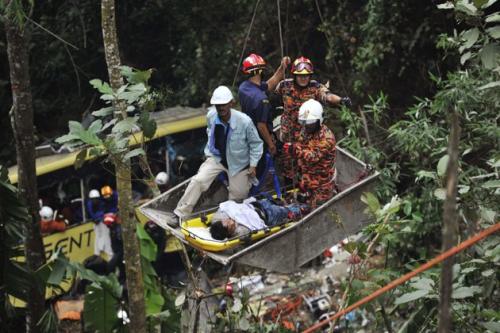 
37 dead as Malaysian tour bus plunges into ravine
News Wires / Phuket Gazette
PHUKET: A bus travelling from the Malaysian hilltop gambling resort of Genting Highlands to the capital Kuala Lumpur plunged 60 meters into a ravine on Wednesday, killing as many as 37 people, officials said.

Rescue workers had taken 17 survivors to hospital, but said 32 passengers were still in the wreckage.

“Our early observations indicate they are all dead,” Federal Territory Fire and Rescue assistant director Azizan Ismail said in a statement.

Crews used a crane to lower rescuers down to the bus, which was wedged in between trees below.

Genting Highlands, 55 km from Kuala Lumpur, has the country’s only legal casino.