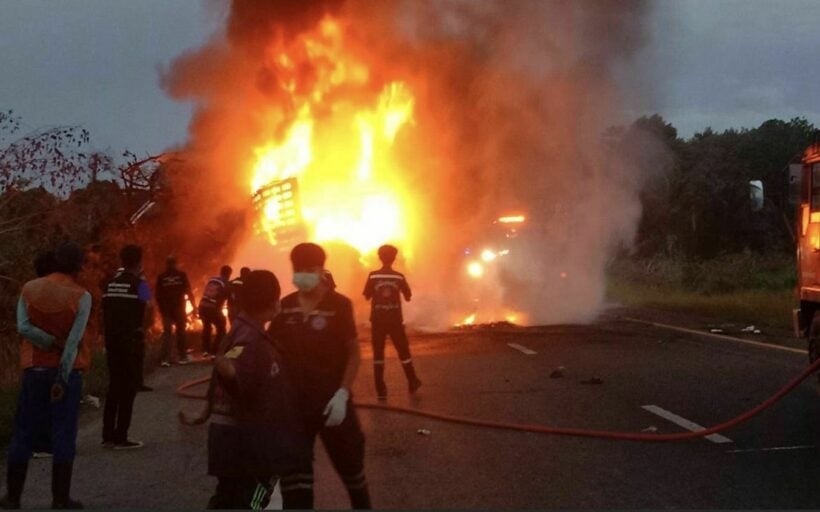 3 people are dead and 1 more person is seriously injured following a 10-wheeled truck smashing into the back of a trailer that was carrying trees. A truck full of tires then careened into them, which then burst into flames. The fiery car wreck happened in the southern Thai province of Surat Thai, early today.

The crash happened on the Surat Thani Krai section of Highway 44 around 4:30, says police from the Khian Sa police station.

Firefighters arrived at the scene to put out the blaze which was tearing through the truck full of tyres and the 10-wheeler. The truck carrying the trees had crashed into a nearby ditch.

After about an hour, the firefighters were able to put out the blaze.

The identities of the 3 dead are not currently known. They were found dead at the scene. The injured man has been identified as 58 year old Pornpipat Phutthasen. He suffered a broken right leg. His left leg was also seriously injured. He was brought to Surat Thani Hospital for further medical attention.

The initial police investigation showed the truck carrying trees was driving along the route before the 10-wheeler smashed into it. Then, the third truck entered the scene. The tyre carrying truck. It nailed the 10-wheeler which sparked flames.

Further analysis on the cause of the crash has been ordered by Surat Thani officials. The hope is that the results will help prevent future accidents from occurring at the same location.