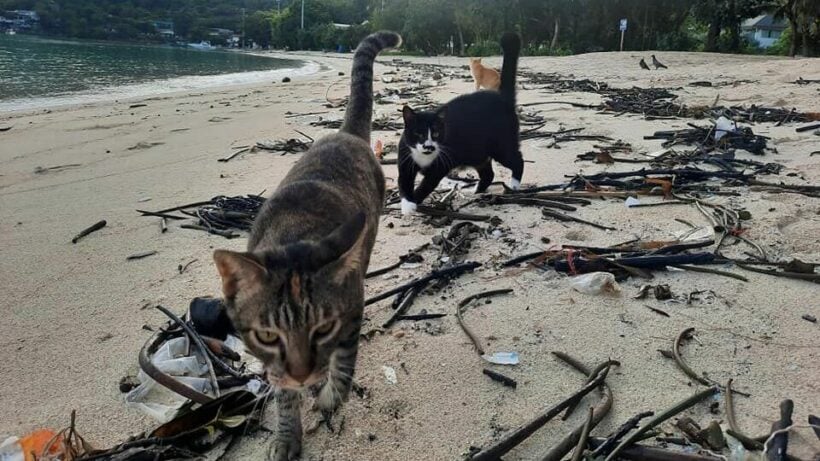 More than 1,000 cats have been abandoned on Koh Phi Phi, the small collection of islands that are part of Krabi’s province. The cats were stranded by their owners after Covid played havoc with Phi Phi’s tourism.

Thai PBS says the owners worked on the island or were entrepreneurs that had to leave the islands due to Covid, under the impression the leave would be temporary. Many of the cat owners have not returned to collect their cats after it became clear tourists weren’t coming back to Phi Phi in the near future, says Suda Klinchuen, a volunteer.

Local officials attempted to keep the cat population under control through mass sterilisation, but it proved unsuccessful. Suda says many cats can be seen along the Phi Phi streets, waiting to be fed by volunteers. She adds that volunteers started feeding the cats since March of last year. The volunteers say they feed the cats twice a day.

“A lot of them were starving”, says Suda.

A Facebook page, where people can make donations, has been established to help the starving cats. Back in October 2020, a man was arrested for allegedly torturing cats at Koh Phi Phi hotels.

HolyCowCm
2 minutes ago, Bob20 said: True, you see them even coming out of the concrete crevices around the trees. In Bali those hooks work great. Think it might help here too. But the pigeons annoy me more 🥴 Anything is…
HolyCowCm
7 minutes ago, Fluke said: They left the bags full of restaurant waste out on the street at closing time , and they collected the rubbish about 3-5 AM , giving the rats plenty of chance to feast .   …
Jason
It's the sad reality of a pandemic, when pets end up being abandoned. Many people seek the comfort of pets in lockdowns to give them some positivity. But cats on Phi Phi that are now malnourished will seek to kill…
thai3
2 hours ago, whitesnake said: You are a <x x x x x x x x x> person!  Total hypocrisy by meat eaters coming over al ahhh over a few mangy felines. Mrs almost crashed the car today braking for…
Cathat
just use the Singapore system of capture nuture and then cut a small v out of one ear and release. Cats become community cats,rat and feline population is then kept under control. Only real problem is cats hunting the native…