A man, who had recently been released from prison for attempted murder, has shot and killed a man’s son. Police believe the father had ‘dobbed’ him into authorities on a weapon’s charge and was acting as revenge.

But the father claims that it was all a misunderstanding and his son was now dead for no reason.

Banmuang reports that Petchaburi Police were called to a restaurant in the Wang Khrai district where a large crowd had already gathered following the shooting.

The dead 39 year old was lying in a pool of blood in the restaurant. He was identified as Anan Khamsorn from Kaeng Krachan. Police report that he was shot five times in the head, body and thighs.

A 68 year old witness, the aunty of the victim, says her nephew had been eating at a table with 45 year old Niphon Khampo.

49 year old “Chet” Nithakasem arrived with another man and sat at a nearby table. When he identified Anan, Wongsiriwat went up to him and said: “Who are you and who is your father?”

Anan said that his father was Thongchai or “Ing”. Wongsiriwat became angry, according to witnesses.

He said: “Years ago your ‘expletive’ father reported me to police for having a weapon of war”.

A violent argument broke out where Wongsiriwat pulled out an 11mm gun and shot the victim multiple times. He then fled on the back of his friend’s motorcycle.

Both men were soon arrested. The getaway driver was 32 year old Akkra Semthet.

Thongchai Khamsorn denies that he was ever a police informant saying that Wongsiriwat had made a mistake after seeing him in the area at the time.

The Petchaburi police chief says that the shooter had only been out of jail for eight months. He had served time for an attempted murder after shooting the friend of his wife’s in Ban Nong Tian. 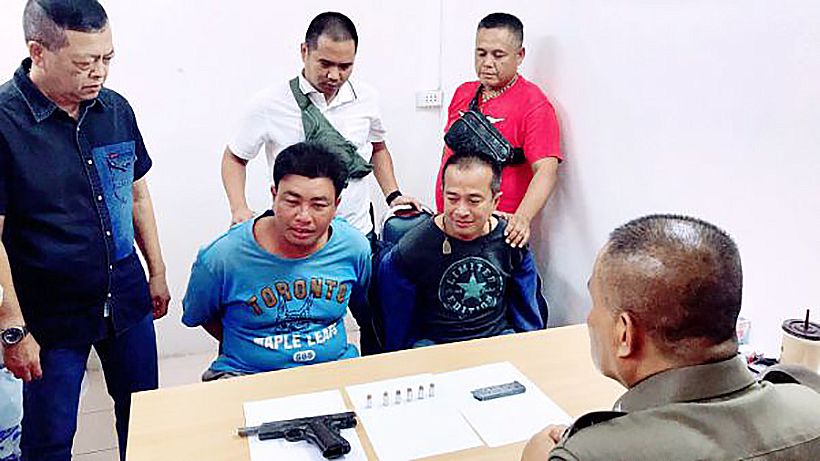