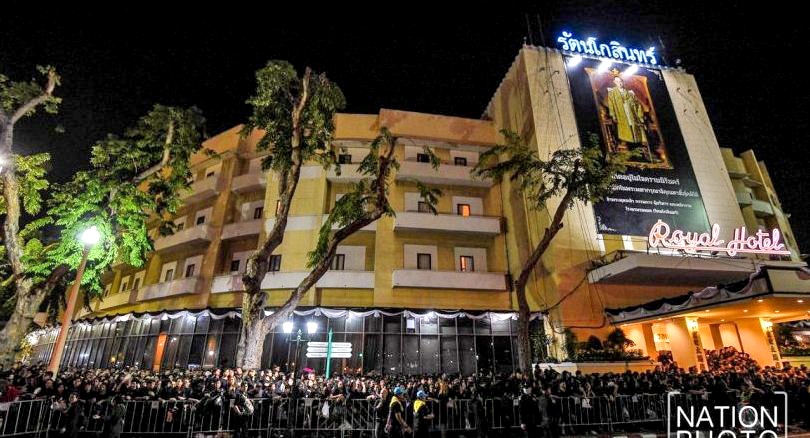 A huge crowd turned out around Sanam Luang on Saturday to watch the final dress rehearsal of the historic Royal Cremation Ceremony for His Majesty the late King Bhumibol Adulyadej.

Many of them had arrived at 9pm on Friday and camped out to reserve vantage viewing positions for the dress rehearsal of the royal processions for the Royal Cremation Ceremony.

The Royal Cremation is scheduled on October 26 next week.

Mourners who wanted to get access to the prime zone, where some 40,000 people can gather, had to go past nine checkpoints that opened at 5am on Saturday.Her Royal Highness Princess Maha Chakri Sirindhorn also attended the final rehearsal of the Royal Cremation processions for His Majesty the late King Bhumibol Adulyadej at the Sanam Luang ceremonial ground on Saturday.This morning, three processions that will take place on October 26 for the transfer of the Royal Urn from Dusit Maha Prasat Throne Hall to the Royal Crematorium at Sanam Luang were rehearsed.

The final rehearsal started at 7.23am today.

Princess Sirindhorn joined the three processions, which covered around 2.5 kilometres and took around three hours.

The three processions that were rehearsed today included:

The first procession is the transfer of the Royal Urn to the Palanquin with Three Poles, or Phra Yannamas Sa Lam Khan, from Dusit Maha Prasat Throne Hall in the Grand Palace to the Great Victory Chariot or Phra Maha Phichai Ratcharot in front of the Elevated Royal Pavilion on the eastern side of Wat Phra Chetuphon or Wat Pho

The second procession involves placing the Royal Urn on the Great Victory Chariot by the Naga Conveyor or Kroen Bandai Nak and then proceed to the Royal Crematorium at Sanam Luang.

The third procession sees the Royal Urn being transferred to the Royal Gun-carriage, or Rajarot Puen Yai, which will circumambulate three rounds counter-clockwise around the Royal Crematorium before taking the Royal Urn up to the funeral pyre or Phra Chittakathan. 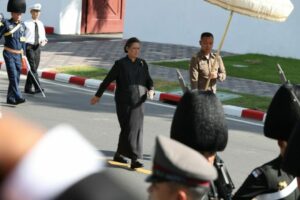 Free share-bike extended to the end of the year