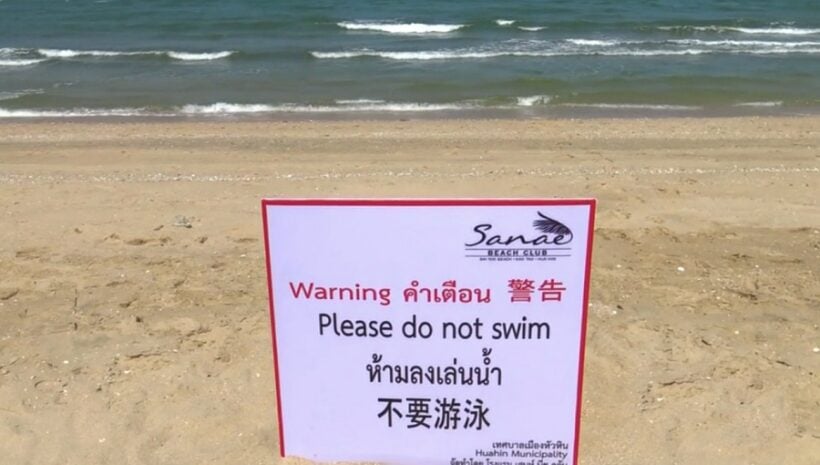 Four bull sharks have been sighted in the sea near Khao Tao, near Wat Tham Khao Tao, about ten kilometres south of Hua Hin, by authorities conducting searches with patrol boats and drones.

Thipamas Upnoi, the director of the Marine and Coastal Resources and Development Centre at the Central Gulf of Thailand says the operation started yesterday and has so far located four sharks, believed to be bull sharks in the Gulf of Thailand seas off Khao Tao.

The operation follows publicity surrounding shark bites to a Norwegian tourist swimming near Hat Sai Noi. He sustained injuries to his leg and is now reported to be in a safe condition.

The sharks sighted off Khao Tao yesterday and today are between 1-2 metres, according to officials from the marine centre.

Bannarak Sermthong, director of Marine and Coastal Resources Management Office 4, says the sighting of sharks in the area is the indicator of good marine environment in the area.

Thai PBS reports that Khun Bannarak says authorities from the tourist police, civil disaster relief volunteers, district officials, jet skiers and soldiers have been involved in the investigation of the mystery attack to the Norwegian tourist – a mystery that now appears to have been solved.

At least 10 signs banning tourists from swimming in the area have been erected on the beach but some tourists have been ignoring the signs and swimming anyway, according to Bannarak.

A shark prevention net of approximately 300 metres wide with floating bouys has been erected 100 metres off Sai Noi beach to a depth of 20 metres to ensure safety for tourists swimming in the sea.

Yesterday noted marine biologist Dr. Thon Thamrongnawasawat said the chance of a shark attack was one in 2 million, while a fatal shark attack was even less likely. Globally there were less than five people killed by shark attacks per year on average  – about 1 in 1.8 billion chance (Wikipedia).

4 Men arrested with more than 1,400 amphetamine pills in Kathu